It takes huge effort for him to make the simplest communication now, but when he does, every word is worthwhile 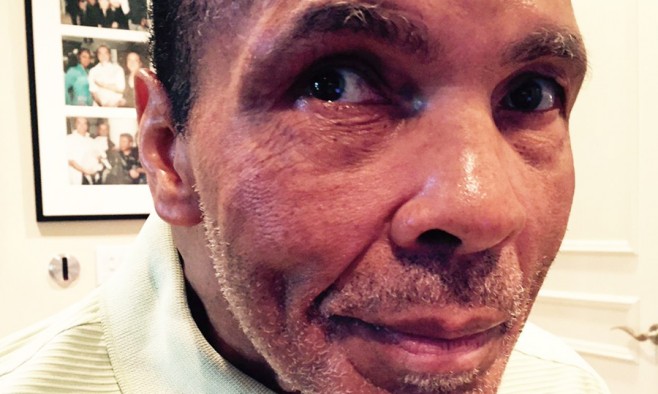 After more than three decades of living with Parkinson’s disease, Muhammad Ali – widely regarded as the greatest boxer to have ever lived – is still bravely fighting the condition, according to his manager Gene Kilroy.

Ali confided to Kilroy that he felt like “a prisoner in his own body,” but that his “mind is good”.

Kilroy, who is in regular contact with the 73-year-old Ali, told the Daily Mirror: “It’s hard seeing him as he is today. He can just about walk and his speech is slurred. It takes huge effort for him to make the simplest communication now, but when he does, every word is worthwhile.”

Ali was diagnosed with Parkinson’s in 1984, three years after his retirement from boxing, a glorious career in which he won 56 of his 61 fights.

Kilroy added: “But even now he has no fear. He says, ‘I’ll stay here as long as God wants me to. When my time comes I’ll have no regrets. I have achieved a lot’.”

In December last year, he was rushed to hospital after contracting what was believed to be pneumonia. He was readmitted a few weeks later, after doctors determined he was actually suffering from a urinary tract infection.

Speaking to The Telegraph, Kilroy said: “When he got Parkinson’s and his voice wasn’t as strong as it used to be, he said, ‘Well, maybe God is punishing me for some of the things I didn’t do right. I believe that when you die and go to heaven God won’t ask you what you’ve done but what you could’ve done. Maybe I’m getting punished. He said I’m lucky, I have no pain with this Parkinson’s. I’m a prisoner in my own body but I don’t have any pain. My mind is good. My speech maybe slurred but my mind is good’.”

It takes huge effort for him to make the simplest communication now, but when he does, every word is worthwhile