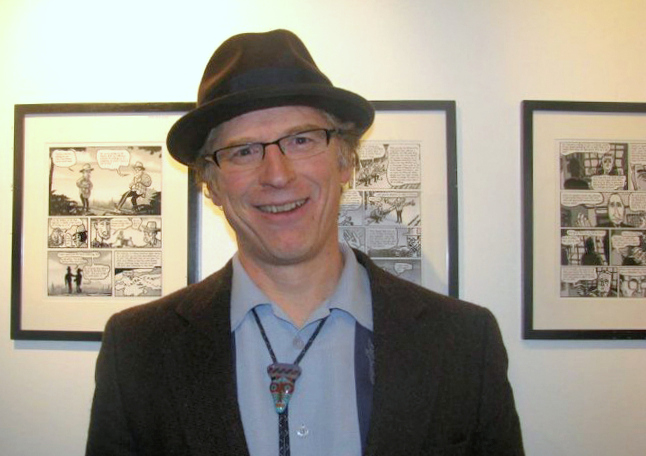 Peter Dunlap-Shohl drew editorial cartoons for the Anchorage Daily News for 25 years. He was diagnosed with Parkinson’s disease in 2002. Since diagnosis he maintains two Parkinson’s blogs, ‘Frozen Grin’ and ‘Off and On, The Alaska Parkinson’s Rag’, and published his first graphic novel ‘My Degeneration’ with Penn State University in 2015.

A natural educator, Dunlap-Shohl is a great explainer of complex medical concepts and vocabulary 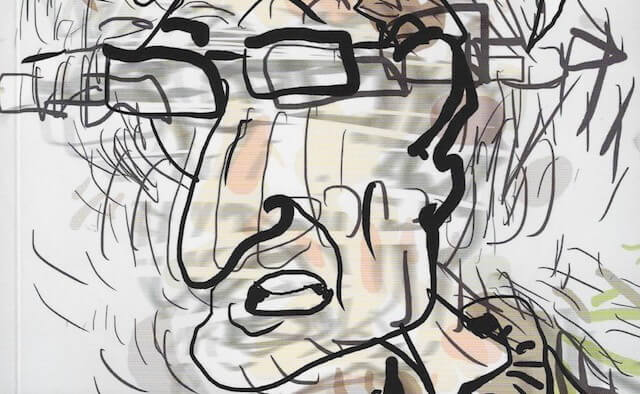 Graphic novel ‘My Degeneration: A Journey Through Parkinson’s’ by Peter Dunlap-Shohl has been recognised by The Journal of the American Medical Association (JAMA) as “one of the best graphic medicine books of 2016”

The article applauds Dunlap-Shohl for the portrayal of his Parkinson’s diagnosis and subsequent acceptance of the condition. The paper’s authors, Michael J Green and MK Czerwiec, say that the book “is a masterclass in communication that should be read by students and practitioners alike, showcasing the strength of comics at both telling and showing.”

In an early section of the book, Dunlap-Shohl reports on some of the thoughtless and harsh things said by medical professionals. One of the doctors says: “It’s Parkinson’s. But at your age, something else will pick you off before it’s a major problem.”

Instead of becoming defeatist, Dunlap-Shohl’s character takes the situation a step further by offering his own tips and positive spin on how a doctor should deliver a Parkinson’s diagnosis. 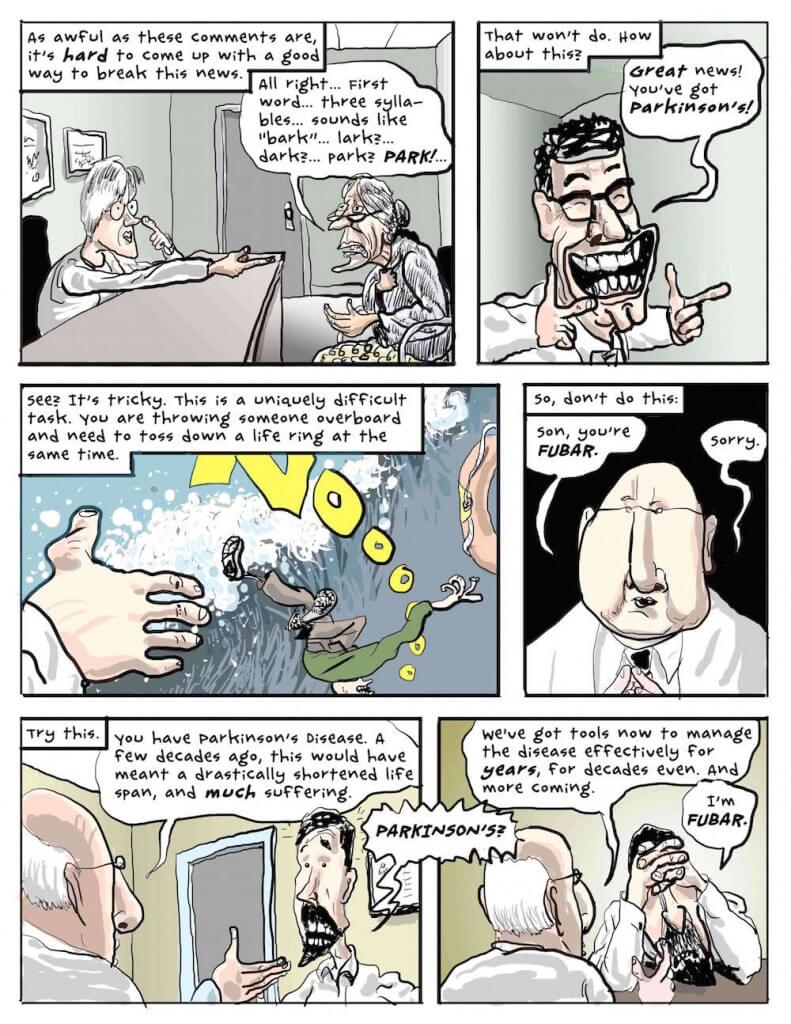 ‘Try this. “You have Parkinson’s disease. A few decades ago, this would have meant a drastically shortened life span and much suffering… We’ve got tools now to manage the disease effectively for years, for decades even. And more coming.”’ 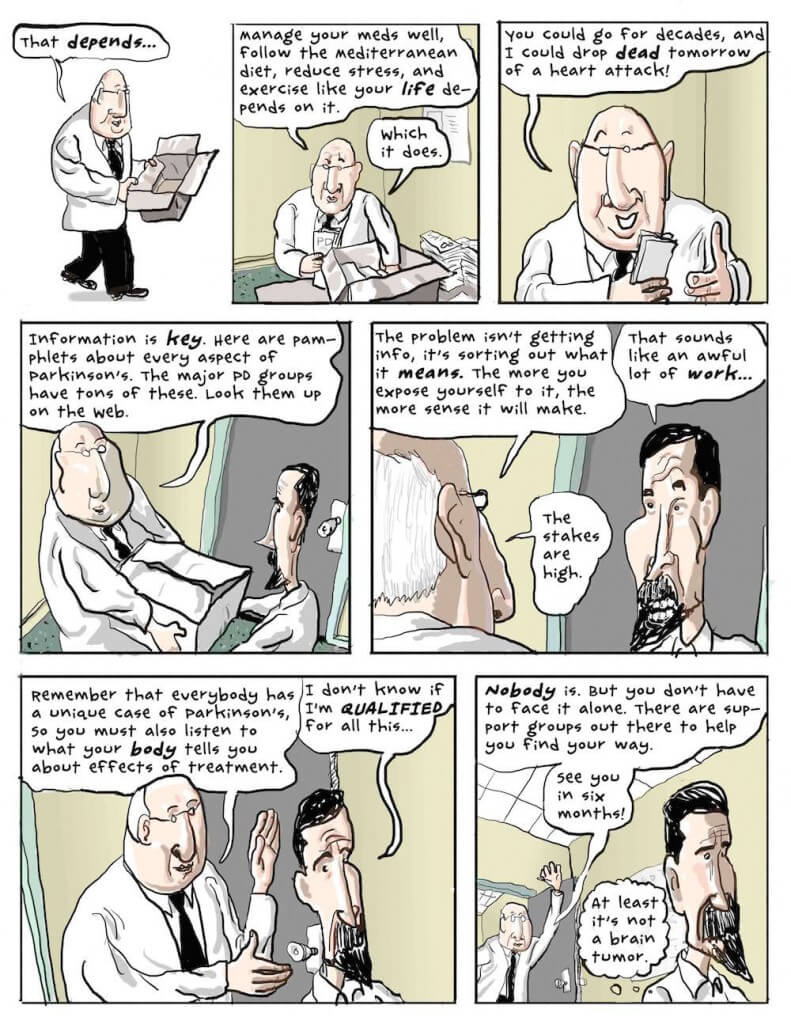 A later chapter offers the reader a new perspective about how the “mask of Parkinson’s” – when facial muscles become immobilised forcing a blank expression – can leave patients open to accidental misinterpretation. When Dunlap-Shohl’s character is happy, his face can’t form the matching emotional expression, and his words come across as “angry, sarcastic, or something altogether different,” according to Green and Czerwiec. “Interestingly, the medium of comics can remedy this miscommunication, since comics convey words and images, providing the visual cues that propel a story along with its intended emotional tone. It’s a brilliant way to make both points.”

After we reached out to Peter to tell him his work had been highly praised in JAMA, he said: “It was a pleasant shock. Comics have been trivialised for as long as they have been around, so it’s a thrill to see them taken seriously. It’s also a challenge to continue to do meaningful work without losing our raffish, outsider charm.”

The authors of the article added: “As clinicians, we particularly appreciated the generosity of his ample advice – which ranges from helpful tips about exercise to how to walk when stuck (try going backwards).”

Peter doesn’t let his Parkinson’s hold back his creativity and he is currently working on a big piece of comic strip work on Alaska’s nuclear weapons history.

The full journal article, ‘Graphic Medicine: The Best of 2016’, can be found on ‘The Journal of the American Medical Association’ website.

Read more: How this graphic novelist drew through his “intolerable Parkinson’s pain”

‘My Degeneration: A Journey Through Parkinson’s’ by Peter Dunlap-Shohl is available from Penn State University Press

Peter Dunlap-Shohl drew editorial cartoons for the Anchorage Daily News for 25 years. He was diagnosed with Parkinson’s disease in 2002. Since diagnosis he maintains two Parkinson’s blogs, ‘Frozen Grin’ and ‘Off and On, The Alaska Parkinson’s Rag’, and published his first graphic novel ‘My Degeneration’ with Penn State University in 2015.

A natural educator, Dunlap-Shohl is a great explainer of complex medical concepts and vocabulary