Only once we have understood the diversity of causes, will we be able to work on developing therapies that take into account the patient’s personal situation 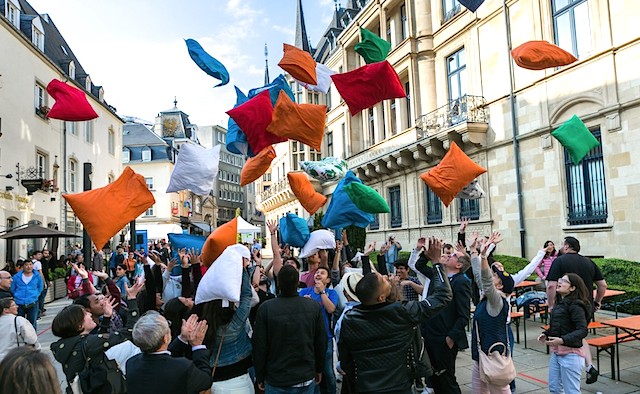 Luxembourgers of all ages met at the Grand Ducal Palace in Luxembourg City last weekend, to take part in a public pillow fight in aid of Parkinson’s awareness. It was a symbol of the fight that many in Luxembourg are waging every day against the condition: people with Parkinson’s, their families, doctors and nurses, researchers and many more.

The event’s aim was to raise awareness of the research activities of the National Centre of Excellence in Research on Parkinson’s Disease (NCER-PD), Luxembourg.

Constant Infalt, country chair and Luxembourg representative of the district governor, said: “We have been supporting biomedical research in Luxembourg for many years.” 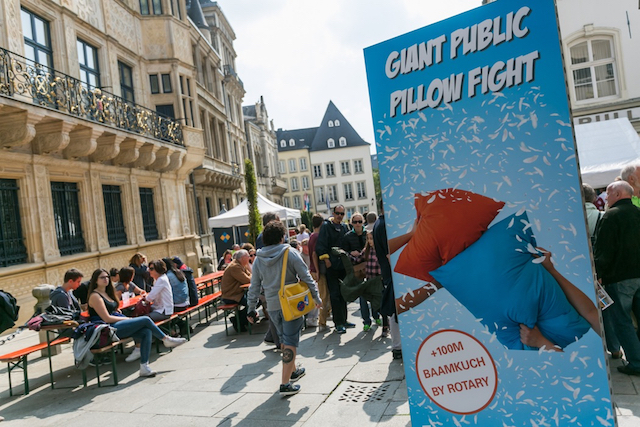 To mark the 100th anniversary of the Rotary Foundation, the Rotarians sold pieces of a 100-metre ‘baamkuch’ traditional layer cake to raise money for the NCER-PD. Constant Infalt continued: “With the pillow fight and the sale of our impressive 100-metre baamkuch, we want to generate an especially effective public incentive.”

Throughout the afternoon visitors could also try on a Parkinson’s suit, which simulates the two most representative motor symptoms of Parkinson’s disease: muscle rigidity and tremors. They were also able to test their dexterity, sense of smell and colour vision, to aid understanding of how the brain controls the senses and movements and why Parkinson’s disease affects these features. 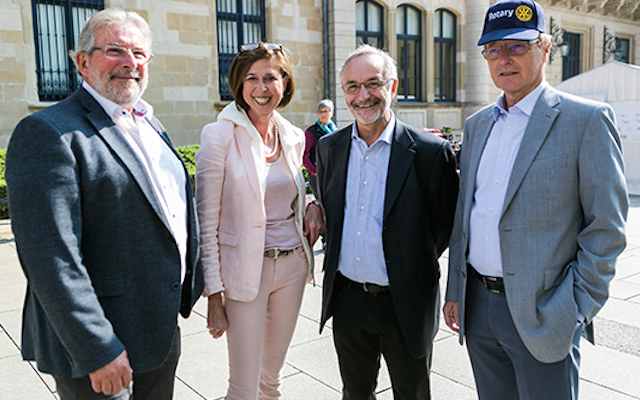 Professor Rejko Krüger, head of the NCER-PD and neurologist at the Centre Hospitalier de Luxembourg, said: “We are proud to be organising this event in Luxembourg together with the Rotary Club and LCSB and sincerely would like to thank all our partners without whom this event would not have been possible. From the proceeds, we will be funding a project to research the genetic causes of Parkinson’s.”

The disease can be triggered by any number of different genetic or external factors, and one of the problems in Parkinson’s treatment so far is the lack of patient-specific therapies.

“Treatment of this disease has improved considerably in recent years, but there is still a lot to do,” said  Professor Krüger. “Only once we have understood the diversity of causes, will we be able to work on developing therapies that take into account the patient’s personal situation. The project that will be funded by the proceeds from this event is another important component in this.” 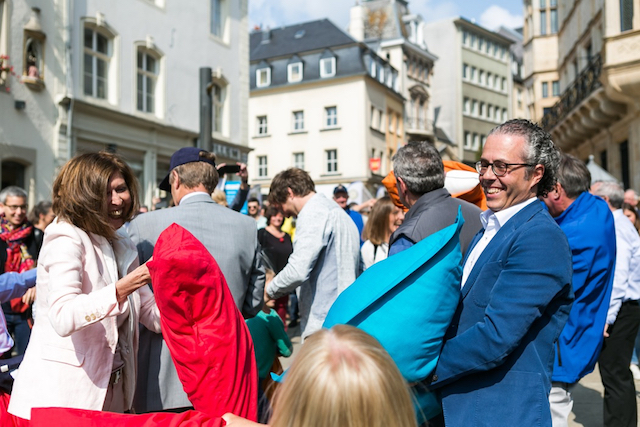 NCER-PD is a joint initiative of four partners in Luxembourg: Luxembourg Centre for Systems Biomedicine, Centre Hospitalier de Luxembourg, Integrated Biobank of Luxembourg and Luxembourg Institute of Health, which are uniting their efforts and expertise to develop new methods for the early diagnosis and treatment of Parkinson’s disease. The Luxembourg Parkinson’s study NCER-PD has been funded by the Luxembourg National Research Fund since 2015.

The LCSB is a biomedical research centre of the University of Luxembourg. It is accelerating biomedical research by closing the link between systems biology and medical research. Collaboration between biologists, medical doctors, computer scientists, physicists, engineers and mathematicians is offering new insights into complex systems like biological cells, organs, and organisms.

Only once we have understood the diversity of causes, will we be able to work on developing therapies that take into account the patient’s personal situation

A roundup of Parkinson’s news stories in November