With only one major breakthrough in managing Parkinson’s over 50 years ago, there is an urgency within Parkinson’s community to find a cure. 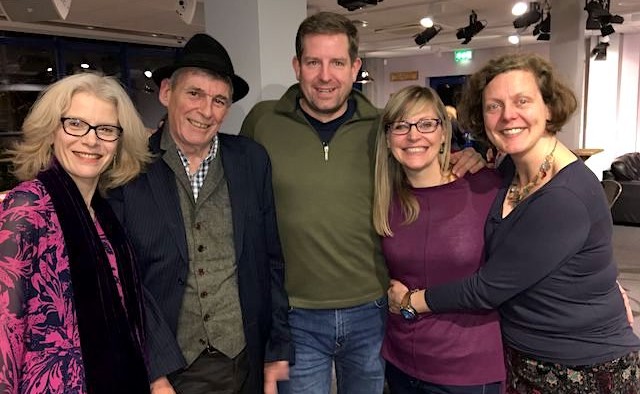 We spoke to UK-based writer Julie Walker (far left) about ‘These Three Words’, a new play inspired by her Parkinson’s diagnosis seven years ago.

Julie shares top tips for others in her position, considers how the condition has boosted her creative confidence – and reflects on the unique challenges facing younger people with the condition

You’ve recently written a new musical, ‘These Three Words’, based around Parkinson’s diagnoses. Can you tell us all about it?

Andy Johnson – who I met at a local Parkinson’s UK support group meeting – asked me to collaborate with him on writing a musical about Parkinson’s.

Andy was diagnosed with early onset Parkinson’s at 49, and has been living with the condition for nearly 14 years. I was diagnosed seven years ago, when I was just 44.

‘These Three Words, the Musical’ is about those road trips, interspersed with surprising, sometimes humorous, musical numbers. It concentrates on the first few months after a husband is told he has Parkinson’s – and the effect and emotional impact it has on him and his wife.

How did you come up with the script for the play?

Andy had already written and recorded an album, Long Hard Road, by Affinity Formation, which was influenced by his own experience – and I wrote poems that Andy then developed into song lyrics.

Combined, these evolved into a script. However, life and Parkinson’s got in the way and the script sat in a drawer for several months – until earlier this year when we were inspired to enter a local competition.

The musical had to be edited down to a 15-minute play, so we turned the songs into short verse and a new script was born. We have since been overwhelmed by the reaction to the play, and are now ready to continue working on the original project ‘These Three Words, the Musical’.

The script and songs are written and we now need help with the next stage which is to compose the music and make Andy’s original idea a reality. So watch this space. Is the world ready for a new genre of musical – a diseasical?

What do you hope people in Parkinson’s community take from ‘These Three Words’?

Our key message is that there is more than one victim of Parkinson’s. And this applies to any chronic illness or life changing event.

When diagnosed, in our experience, the person with Parkinson’s initially becomes the focus of attention. Immediately after diagnosis, and for the first few months, I certainly went from being an annoying hypochondriac with a shaky hand to someone with a serious disease.

I think the impact that a Parkinson’s diagnosis has on others is often overlooked or ignored. We hope that the play will spark discussion between people with Parkinson’s and their friends and family.

We also hope the play will raise awareness. With only one major breakthrough in managing Parkinson’s over 50 years ago, there is an urgency within Parkinson’s community to find a cure. Hopefully this play will help keep Parkinson’s in the public arena, and that will help lead to more research and ultimately a cure.

When you were diagnosed with Parkinson’s at 44, did you know much about the condition?

The diagnosis was unexpected, after all I wasn’t an elderly man with a tremor, which is the stereotypical image of someone living with Parkinson’s. I knew nothing about the condition.

After months on living with seemingly unconnected symptoms, initially I was relieved that someone finally believed me. However, the sense of relief on diagnosis day very quickly turned into a rollercoaster of emotions as I found out more about Parkinson’s.

Since being diagnosed I have thrown myself into raising awareness, by writing about living with early onset Parkinson’s. I write a blog called ‘Parkinality’ and a fortnightly column in the local newspaper.

About a year ago, I also started writing and performing my own poetry about Parkinson’s and am currently publishing my first poetry book, ‘The Parkinality Poetry Book’.

As a writer, blogger and newspaper columnist, do you find that writing can be used as a Parkinson’s therapy?

My writing has given me much needed focus in the unpredictable world of living with Parkinson’s. I try and write with humour and put a positive spin on my life – although Parkinson’s is not funny, and I often feel very low. I write so that people can read between the lines, beyond the humour, and see the underlying serious message.

Pre-diagnosis I would never have had the confidence to write a book or perform on stage. Parkinson’s has given me a new perspective on life, and I approach challenges with the question “What’s the worst that can happen?” The answer is embarrassment in the case of a rubbish book or awful stage performance.

Is there an issue unique to people with young onset Parkinson’s that you’re particularly passionate about?

Being diagnosed at a younger age means that we have to face the challenges of living with Parkinson’s while trying to work and raise a family. We still have a lot to contribute to society, but also a long time to live with this degenerative neurological condition.

Women diagnosed before age 50 are likely to go through menopause while living with Parkinson’s. In my experience the monthly cycle of hormone fluctuations, combined with menopause, has an impact on Parkinson’s and medication effectiveness. This needs more research and understanding.

Mental health issues are also often overlooked or ignored. Not only for the person living with the condition but also for their family and friends who will struggle to come to terms with the diagnosis.

Finally, what three words would you use to describe Parkinson’s?

The medication I take is unreliable meaning that symptoms switch on and off throughout the day and night, making me unpredictable and unreliable.

If you don’t live with the condition, it is very difficult to understand the variety of symptoms and the unpredictable nature of the disease.

You do not change the instant you are diagnosed; you are the same person as you were yesterday.

Do not compare yourself to others:

Everyone’s progression and symptoms are different.

You are not alone:

Once the dust has settled and everyone has gone back to their everyday lives, it can feel very isolating. But there is support for everyone – from online communities to local support groups. It just takes research.

Do not give up on exercise:

If you don’t exercise, take it up – and try something new. Tennis, running and table tennis are all sports I’ve enjoyed post diagnosis.

Take a pen, paper, list of questions and a friend.

Do not randomly search the internet:

The internet is a wonderful but often scary place. I would much rather speak to someone rather than finding some uncorroborated news article to worry about.

Do not assume you will be told about all the resources available:

Check your local community, doctors and newspapers for support groups, benefit entitlement, disability resources and access to other medical services such as speech therapy, physiotherapy, dieticians and Parkinson’s nurses.

To find out more about Parkinson’s and music therapy please visit the Parkinson’s Europe website.

With only one major breakthrough in managing Parkinson’s over 50 years ago, there is an urgency within Parkinson’s community to find a cure.

Diagnosed at 29, Emma and David will create daily video blog