The speed of degeneration has taken me by surprise, but I find new ways of painting.

The life and work of John McLean 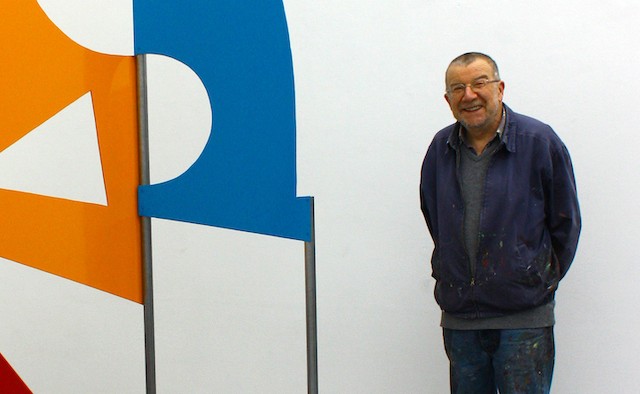 Renowned British abstract artist John McLean died last month at the age of 80. We look back at his life, how his Parkinson’s diagnosis helped him to “find new ways of painting” – and the homage paid by friends and fans on social media

“Parkinson’s is completely irrelevant to me in how, and why, I appreciate and make art,” Scottish artist John McLean told Parkinson’s Life in 2017.

McLean – born in Liverpool, UK, in 1939 – was the son of Scottish painter Talbert McLean, who exposed him to abstraction at a young age. He later went on to study English at the University of St Andrews, UK and History of Art at the Courtauld Institute of Art in London, UK.

Despite not studying art formally at university, the works of Henri Matisse, Kenneth Noland and Wassily Kandinsky, inspired McLean to paint. He described his own style as an “exploitation of colour.”

He began to exhibit his work soon after leaving university, and in 1972 a meeting with art critic Clement Greenberg led McLean to network with several US abstract painters – something which moulded his own style.

His career took him around the world, with McLean spending time painting and working in London, Edinburgh, New York and Boston, US, over the coming decades.

Diagnosed with Parkinson’s in 2014, when in his seventies, McLean continued to paint while living with the condition and said that Parkinson’s had exposed him to new techniques.

He told Parkinson’s Life: “I never thought I’d find myself saying something as positive as this, but it looks as though having Parkinson’s has exposed me to some techniques that I might have otherwise missed.”

“When I was diagnosed the neurologist explained to me the non-curable and degenerative nature of the condition. And all that seemed pretty final.

“The speed of degeneration has taken me by surprise, but I find new ways of painting, which opens up vistas rather than closes them.”

While fighting the condition, McLean was one of 50 artists to take part in the Cure3Exhibition in 2017 – an annual event organised by The Cure Parkinson’s Trust to raise money for Parkinson’s.

“I actually hadn’t heard of The Cure Parkinson’s Trust before I got involved in the exhibition,” he said at the time. “But, of course, I was very interested because I live with Parkinson’s myself.”

In 2017 McLean also starred in ‘Which Way Up’, a documentary focusing on the creation of his art and the abstract colours that were so prevalent in his work.

Following the news of his death, friends and fans took to social media to pay their respects. On Twitter, Patrick Jones reminisced about times he’d spent with McLean.

Tribute to my old friend John Mclean,who I spent many happy hours with,looking at Paintings .Here he is in Exeter,where I invited him, talking to a group of artists from the Abstract Art Course in the 90s pic.twitter.com/Bl5yJ0tP3g

Very sorry to hear of the passing of John McLean. A true gentleman,artist& teacher. Thoughts to Jan his family and all his artist friends& associates. A very sad loss to all.Peace be with you John.

On Instagram, Heinz Schumi called McLean: “one of the greatest abstract artists.”

Artist John Mclean, Born 12th January 1939, passed away 12th June 2019. One of the greatest abstract Artists, he was a great painter, a great man and a great friend. I will miss him a lot. . . . #artist #art #ripartist #ripmclean #johnmclean

For more information on Parkinson’s and creativity please visit the Parkinson’s Europe website.

The speed of degeneration has taken me by surprise, but I find new ways of painting.

The US actor and activist wowed the Oscars in 2017