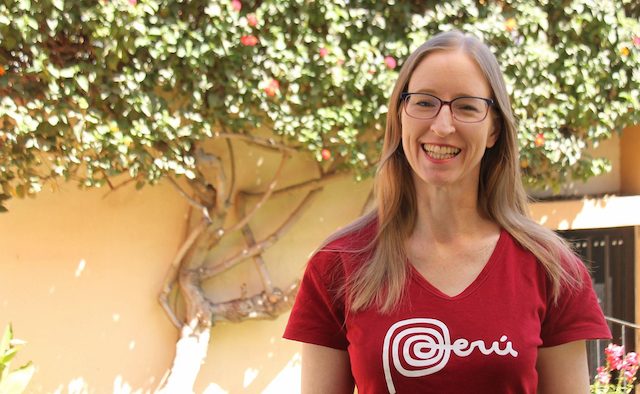 Christine Jeyachandran, a Parkinson’s blogger and filmmaker based in Peru, discusses how her own Parkinson’s diagnosis inspired her to make the short documentary film, ‘Would you sell your house to save your mother?’

Tell us about your experience of Parkinson’s disease.

When I was diagnosed, almost eight years ago in Peru, I was just 37 years old. I asked the doctor to explain my diagnosis in English in case I had misunderstood the Spanish – but the diagnosis was clear. Everything he said about my symptoms made sense. From then on, I was reminded when I heard the slapping of my foot: “You have Parkinson’s! You have Parkinson’s!”

I knew very little about Parkinson’s but suddenly had to become an expert, because people started asking me questions about the condition. I wasn’t a sporty person, so it was a struggle to get into good exercise routines. But I was motivated to exercise when I suddenly couldn’t walk and everyday tasks became harder.

Why did you start your blog, ‘Handstand for Parkinson’s’?

When I was diagnosed, someone said I should write about my experience, but it felt too raw. The impetus was the #UniteForParkinsons campaign in 2018, for which my husband, David, and I sent in a short video. The organisers liked it and used it as a short promo.

The positive feedback from friends and strangers encouraged me that my voice was important in educating people about young-onset Parkinson’s disease.

What inspired you to start making films?

When I heard about the World Parkinson Congress (WPC) video competition, I had just started artistic gymnastics and I decided that I would film my progress towards doing a handstand – but I wasn’t sure if I was going to succeed or not.

My husband taught me editing basics, and the video I created was shortlisted as a finalist at World Parkinson’s Congress 2019. Everyone I met at the WPC encouraged me. As I achieved more and more in gymnastics, I made a before and after video, alongside a video on the benefits of exercise, and it snowballed from there.

What motivated your short film, ‘Would you sell your house to save your mother?’

I was on vacation in the north of Peru and decided to visit some of the contacts I’d made who had Parkinson’s, to encourage them. But within minutes of meeting Rosita and her mother, Dorys, I was shocked by their story and the sacrifices they’d made. 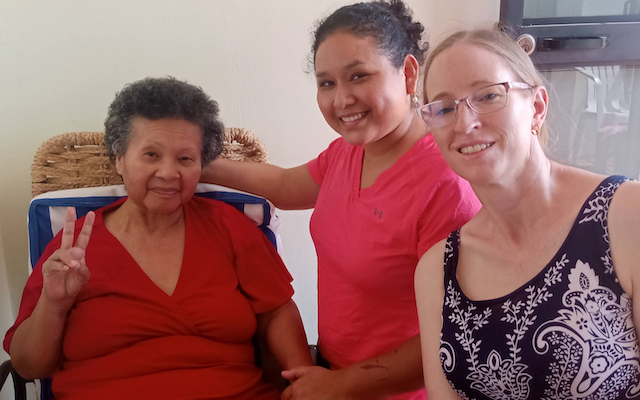 Christine (right) with Rosita (middle) and her mother, Dorys (left).

I started filming the story, but my camera battery died. I messaged my friend, filmmaker Jácoby Codina, and he sent an audio with tips on how to go back and film the whole story. So, it was providence – I was there, ready to listen and the story came to me. Jácoby’s encouragement and guidance left me no doubt that this was worth sharing.

I chose the name ‘Would you sell your house to save your mother?’ as it struck me as a universal question. Most of us have a mother, who we love and would not want to see in pain. And that is what the story is about. The family and their fight to help their mother.

It was an emotional experience – shock, horror, indignation, anger, tears, awe and relief. As detail after detail came out … you can’t even imagine. I was very impressed with Rosita’s fighting spirit to help her mother. There is so much more to the story that had to be cut from the final film.

Seeing Dorys walk across the room and hearing her speak quite clearly and lucidly was miraculous. She cried and thanked me for coming. I cried too.

In Peru, Parkinson’s has a negative stigma, and patients and their families often feel embarrassed. The family was therefore hesitant for me to share their story. I’m thankful for the bravery they showed in letting it go public. They see that the film has encouraged others to fight and tell their stories.

How do you hope people will respond to the film?

I hope they’ll share it, keep this story about Parkinson’s and the struggle the condition causes around the world alive, and that it will touch others. So many families live like this or in worse conditions.

I’m hoping the film will win a prize at the Focus on Ability Short Film Festival. The festival, based in Australia, had 97 finalists from 21 different countries in this category. The winner will be announced on 27 October in an online ceremony.

Even if it doesn’t win, I believe it will pave the way for my next project. I’ve been amazed by the support for ‘Would you sell your house to save your mother’, so I’m hoping the whole community will promote it.

What more needs to be done to raise awareness of the challenges facing people with Parkinson’s?

I want to break the silence and stigma associated with Parkinson’s, so (with help) I have founded the Alianza Iberoamericana de Parkinson – a Spanish speaking network aimed at educating people about the condition.

We hope this film – and subsequent films – will be an instrumental tool to create awareness about the disease.

Stories like this bring alive the suffering of those with Parkinson’s and their whole families. Stories can connect with people in a way that facts and scientific reports can’t.

A design for Parkinson’s disease community