To have the film embraced by so many people, especially in the Parkinson’s community, was especially gratifying 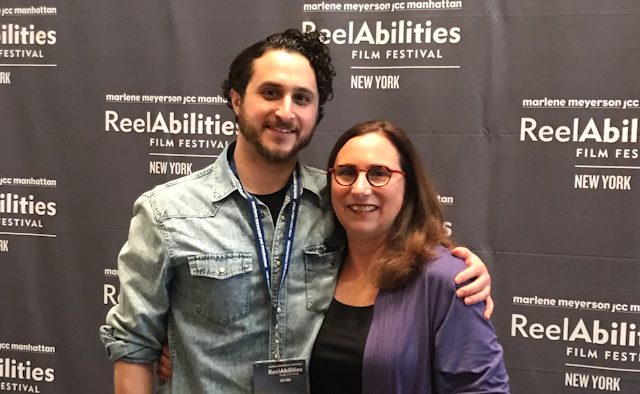 Can art help families to process a loved one’s Parkinson’s diagnosis? We talk to two creatives, a mother and a son, who have collaborated to share their perspectives on the condition.

Filmmaker Zack Grant and artist Debra Magid have worked together on two films about Parkinson’s: ‘Shake With Me’, which explores Debra’s “artistic renaissance” in relation to her Parkinson’s diagnosis, and ‘Morning Walk’ – a short film exploring a moment in life with the condition through a Joyce Sutphen poem.

The beauty of this collaborative partnership? They are mother and son.

We speak to the two artists about how creative expression has helped them come to terms with Debra’s diagnosis as a family.

Tell us a bit about yourselves.

Zack: I’m a director and producer based in New York City, US, working across films and commercials. I went to the University of Michigan, where I studied media theory and television production.

I took a very circuitous route to filmmaking. I studied television production at school but then landed my first job at an advertising agency in New York City as a junior producer – where I had no idea what I was doing. Advertising became a crash course in filmmaking and film craft, and I was fortunate to learn from some pretty amazing directors and creatives, which ultimately sparked my desire to tell my own stories.

Debra: I’ve spent most of my life living in and around New York City, US. I received a BFA from the Rhode Island School of Design, and I have been working as a designer for the last 40 years.

When I was in art school in my early 20s, I was technically proficient, but I had no life experiences and nothing to say through my art. Coming back to making art as a mature person living with Parkinson’s was totally different. I am no longer bound by expectations or conventions. 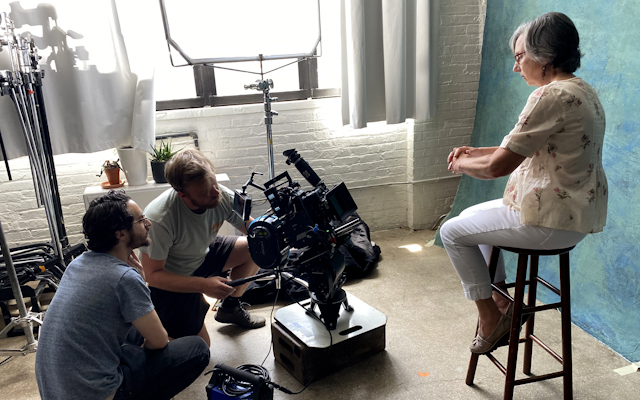 Behind the scenes of ‘Morning Walk’.

How has Parkinson’s impacted your life and craft?

Debra: Parkinson’s has changed my life in so many ways. It is always there in the background, like a buzzing white noise. I have been living with Parkinson’s for over 10 years, so I have had to learn to make accommodations and cope.

Even though my symptoms are constantly evolving, I am lucky because my case is proceeding slowly. One way I figured out how to move forward was to dive back into making art. I had to find things to make me happy. Doing artwork in the studio is the only time I can quiet the noise and forget I have Parkinson’s.

Zack: I actually wanted to make ‘Shake With Me’ for almost two years before I approached my mom about it. At the time, I thought I wanted to tell the story of her artistic renaissance in relation to Parkinson’s, really keeping the focus on the artistic story. But looking back, the film’s true origin was as a vehicle for her and I to have these raw, untapped conversations about her diagnosis and what it meant for our family and our lives – all through the lens of art and creativity.

‘Morning Walk’ was commissioned by Motionpoems, a non-profit organisation that pairs poetry and film. I was asked to make a film based on the titular poem written by the poet Joyce Sutphen, who also lives with Parkinson’s. I was immediately moved by the work and how it subtly yet vividly embodied the Parkinson’s experience and jumped at the opportunity to make a totally different type of film about my relationship with the condition.

What has been the best part about working together? The most challenging?

Debra: The best part of working together was getting to know my adult son as a truly talented professional with a beautiful eye and the ability to tell poignant stories. It was a side of him I had not yet fully experienced.

The most challenging part of the process was waiting. In spite of asking multiple times, he would not show me any part of ‘Shake With Me’ before he felt ready. He had a vision for what he wanted it to be and wasn’t going to rush it. It took real trust on my part. After two years of filming, on my birthday, he sent me the finished trailer for the film. I watched it and cried. It was breathtakingly beautiful.

Zack: Working together has added a layer of maturity and creativity to our already close relationship. I’ve also gotten to experience my mom’s artistic point of view in a way that I would have never known before.

As my mom mentioned, creating boundaries during the making of ‘Shake With Me’ was definitely the most challenging part of working together. I had to balance protecting my directorial goals with my mom’s (understandable!) apprehension for how she would come off in the film. When ‘Morning Walk’ came around, there was a baseline of trust that made the process relaxed and focused on our shared creative expression. 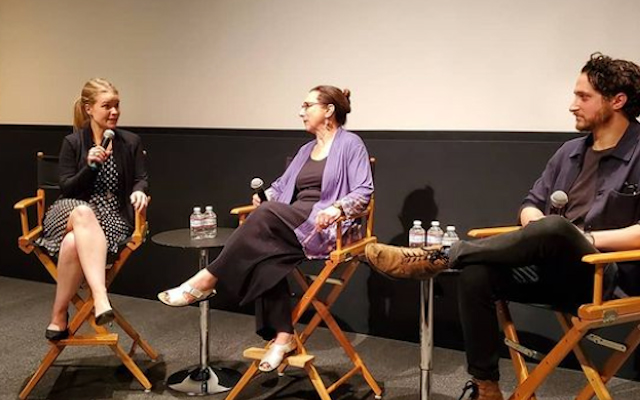 At a screening for ‘Shake With Me’ with the Micheal J Fox Foundation in Los Angeles, US.

How has the fact you are both artists impacted your collaboration process?

Debra: Because we are both artists, Zack and I have similar visual sensibilities, and we both process information in non-linear ways. It makes it very easy to work together visually.

Zack: We speak the same language visually, and we often have the same obsessive tendencies and pet peeves when it comes to our work. That’s not to say we agree on every single creative detail, but our ability to communicate about our respective art is very natural and productive.

Of the two films you’ve developed together, which is your favourite and why?

Debra: Definitely ‘Shake with Me’ – it is such a tender presentation of my personal story. I felt so honoured that he made this beautiful, loving film for me. I never expected to have the experience of creating a project like this with my son.

I especially liked how he took what could have been a totally maudlin topic and presented it truthfully, showing both the hope and challenges of living with Parkinson’s. The entire process was a joy, including the many screenings and presentations we did together after it was complete. To have the film embraced by so many people, especially in the Parkinson’s community, was especially gratifying.

Zack: I love both films for very different reasons. ‘Shake With Me’ will always have a special place in my life that is much bigger than film or art. The film not only helped me understand my relationship to Parkinson’s but also forged a bond between my family and the Parkinson’s community, who have been incredibly kind and supportive.

From a purely artistic standpoint, ‘Morning Walk’ is one of the best pieces I’ve ever made and was one of those rare creative experiences where you know exactly what you want to achieve and then manage to execute it exactly as you intended. So, I definitely will always cherish that feeling of instinctual control and try to harness that mentality in my future work.

Zack, do you have plans for any future film projects focused on Parkinson’s?

I told myself I was done making films about Parkinson’s after ‘Shake With Me’, but here we are. While I don’t have any current plans for Parkinson’s-focused projects, I certainly will never say never!

Debra, what piece of advice would you give to fellow artists who have been diagnosed with Parkinson’s?

Debra: Find a way to make art, even if you have to change techniques or mediums. Get over the “mad at the world” phase and put that emotion into your art. Find a Parkinson’s group that relates to your art form and talk to other people in the same situation. I’ve displayed paintings in group shows by artists living with Parkinson’s in both London, UK, and Texas, US.

Parkinson’s is a heavy load to carry through life. Somehow, you have to find a way to live with it and still move forward. I have learned that I am stronger than I thought I was and have tremendous capacity to cope. You can’t give up. Keep going!

Zack Grant is a director and producer based in New York, US. He has worked on commercials and films since graduating from the University of Michigan, US. He was named in SHOOT magazine’s New Directors Showcase in 2019 and is the founder and executive producer of the creative studio 2020land.

Debra Magid is an artist with 40 years of industrial design experience who has spent most of her life around New York City, US. With a BFA from Rhode Island School of Design, US, she has – since her diagnosis with Parkinson’s in 2012 – returned to her fine art roots.

For more information about living well with Parkinson’s, visit the Parkinson’s Europe website.

To have the film embraced by so many people, especially in the Parkinson’s community, was especially gratifying