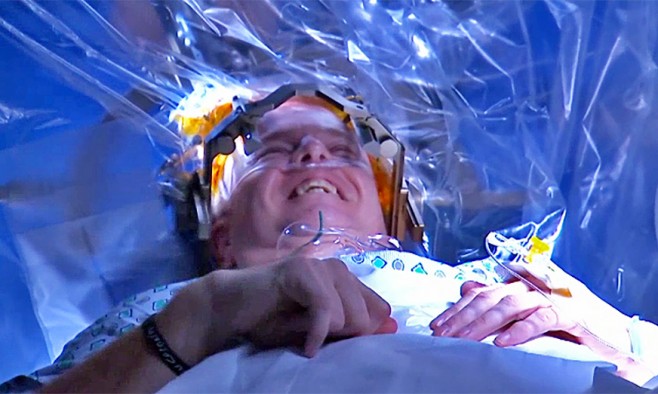 On Sunday, TV programme ‘Brain Surgery Live’ clocked up 2.5 million hits and sparked many talking points causing people around the world to take to social media to voice their opinions. Here’s a round-up of highlights from social media as the action unfolded

For the first time ever in US television history, the National Geographic channel broadcasted brain surgery live from the operating theatre on Sunday (25 October 2015). American surgeons delicately implanted electrodes into the brain of Parkinson’s patient Greg Grindley while he was awake in an operation called deep brain stimulation (DBS). 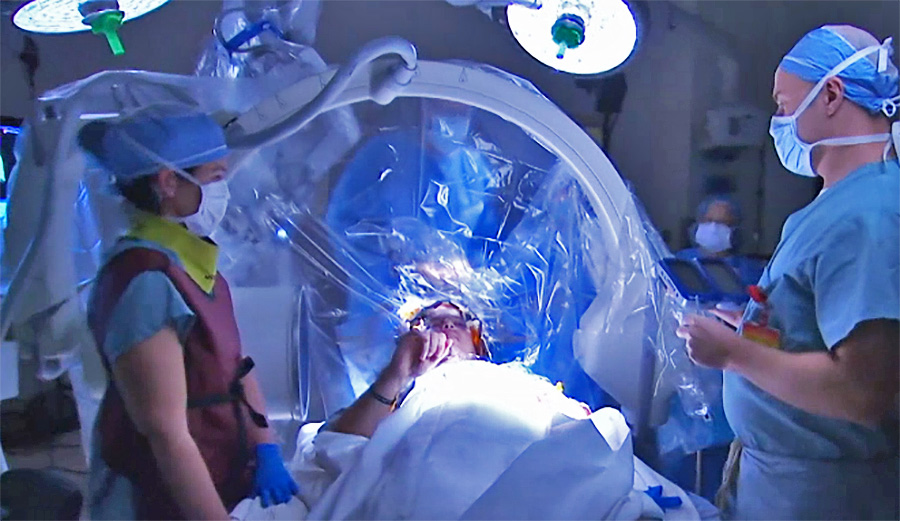 The procedure went smoothly and the day after the surgery, National Geographic posted a picture of Greg Grindley sitting up in bed and smiling, on his road to recovery.

According to Deadline Hollywood, a leading source of news in the US entertainment industry, viewer numbers peaked at 2.5 million during the course of its two-hour broadcast and #BrainSurgeryLive was the third most popular hashtag in the US during its final hour.

The show aired in 171 countries, in 45 different languages, creating mixed reactions across the globe. From the sheer awe at seeing tremors caused by Parkinson’s suddenly stop, to the ethics of filming live in the operating theatre, there were undoubtedly many talking points. But was the show received positively or did it cause controversy?

Messages of excitement and encouragement poured in from countries such as Turkey, France and Honduras:

@NatGeo that is too cool. Congratulations on a tremor free day and may you and your family enjoy the new you

Medical experts were on hand to offer their advice in Q&A sessions on social media. Dr Michael Okun, US medical director for the National Parkinson’s Foundation (NPF), tweeted live during the show, while Dr Daniel Martinez, NFP’s ‘Ask the Spanish Doctor’ tweeted his advice in Spanish:

On Facebook, many viewers had positive reactions to this TV first:

Meanwhile, others disliked the format and production of the show. Some viewers complained that there wasn’t enough emphasis on the surgery: 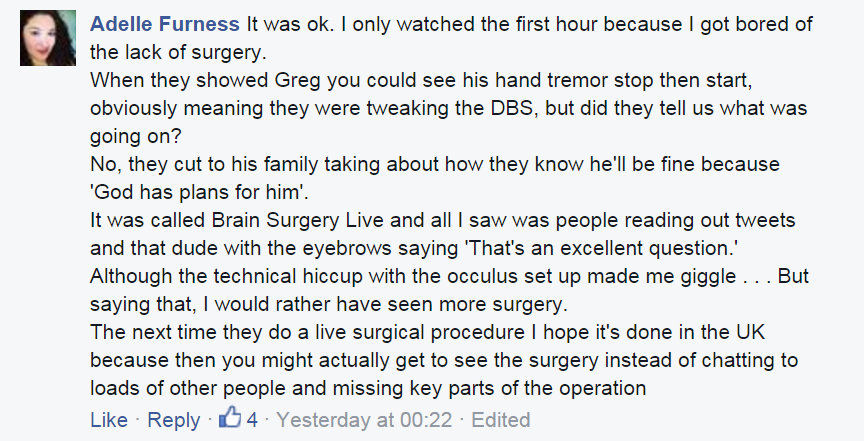 Many figures on social media used the hashtag #BrainSurgeryLive to tell their own stories of deep brain surgery, explaining that DBS is not a cure for Parkinson’s disease but a treatment method:

The live broadcast proved ethically problematic for some medical experts, leading to a lengthy debate in the US press.

Dr Duke Cameron, cardiac surgeon-in-charge at The Johns Hopkins Hospital in Baltimore, has consulted for groups writing guidelines for live surgeries. He said in an interview that operating teams can be distracted by the filming and that commercial and promotional interests can compromise patient safety.

Cameron said to the Boston Globe: “It’s hard to say we are getting serious about patient safety when putting on circus acts like live brain surgery. This kind of behaviour is absurd.”

He expressed concerns that the show, with its production team of over 100 people, compromised the safety of the patient as the crew members might get in the way, or simply stand too close to the operation.

It’s difficult to predict how Greg’s condition may progress bearing in mind DBS is not a cure. However, it’s safe to say that it has raised awareness of Parkinson’s disease and DBS as a treatment method.

* This article was updated published on 26 October 2016

If you want to find out more about DBS and Parkinson’s disease, please visit the EPDA’s online library here

New Parkinson’s survey to campaign for better quality of life

Have your say on living with Parkinson’s