People with Parkinson’s have always encountered difficulties in hospital, with non-specialist staff simply not understanding how important it is for them to get their medication strictly on time. 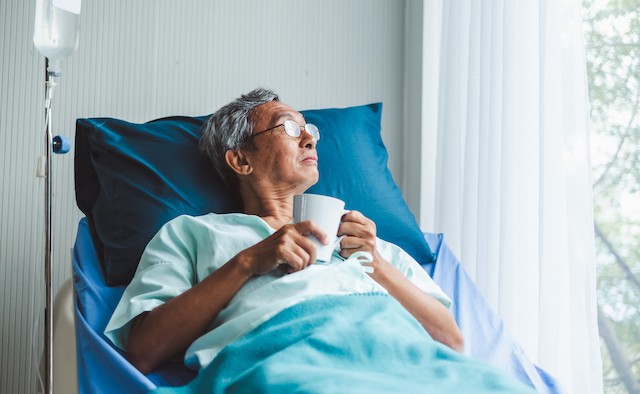 People with Parkinson’s are “unsafe” in UK hospitals, according to a new report from charity Parkinson’s UK.

After surveying 700 people living with the condition earlier this year, the charity found that 63% of patients were not receiving their medication on time when staying in hospital. And more than 75% reported that their health had worsened as a result of late medication.

“People with Parkinson’s have always encountered difficulties in hospital, with non-specialist staff simply not understanding how important it is for them to get their medication strictly on time,” said Power. “The ongoing crisis conditions in hospitals are almost certainly making this problem substantially worse.”

Discussing the report, Lloyd Tingley, Parkinson’s UK’s senior health policy and campaigns adviser, said: “It’s clear that hospitals aren’t always the safest places for people with Parkinson’s, with many sharing with us that they’re terrified of ever having to be admitted.”

“I needed my Parkinson’s medication at 12 noon but when I asked for it at that time, I was told the drug round was not until 1pm. No one on the ward was aware that people admitted with Parkinson’s had to get their medication at very specific times. By the time I got my tablets, I couldn’t even communicate.

“I had uncontrollable tremors, I couldn’t do anything for myself, I literally couldn’t function, and I was immobile.”

Another participant with Parkinson’s said she felt ignored by hospital staff when she asked to take her own medication:

“It was like banging my head against a brick wall. I felt ignored and like the staff didn’t understand Parkinson’s and the severity of the situation. Because of this my Parkinson’s symptoms got so much worse.

“One time I was given the wrong drugs but felt I had no choice but to take them because it was the only thing on offer to me. I ended up passing out. I could still hear everything going on around me and alarms going off and the staff rushing around trying to help me, but I couldn’t move or talk. It was terrifying.”

The EPDA’s secretary general, Russell Patten, said: “One of the EPDA’s strategic goals is to strive for healthcare systems where people with Parkinson’s receive appropriate treatment and individualised care. This includes, of course, hospitals.”

A nationwide call to action

Since the launch of the Get It On Time campaign, the Parkinson’s community has taken to social media to share their experience of hospitals.

One Twitter user commented on her mother’s struggle to get medication on time in hospital.

Every time my dad goes in he gets worse. I completely get that they are busy, but so many medical people have no clue the devastating impact it can and does have. Going into hospital should never make things worse.#GetItOnTime

Jeremy Vine, UK presenter for BBC Radio 2, expressed his support for the campaign.

Parkinson’s campaigner Jonny Acheson shared an illustration encouraging others to back the initiative.

This is Basil he is in hospital and is due his next #parkinsons medication dose, which he really needs on time to keep him moving. That will help him and he will thank you forever.
Click the @ParkinsonsUK link to support the #GetItOnTime campaignhttps://t.co/fsy3PJLnIB pic.twitter.com/UGQzYlzbsp

Commenting on the research findings, a spokesperson for NHS England, said: “Patients with Parkinson’s and other neurological conditions are among the most vulnerable in our society and all parts of the NHS strive to provide them with the best care possible.

“This summer we published guidance, in partnership with charities such as Parkinson’s UK, to help local NHS staff take practical steps to improve the care for these patients in our hospitals.”

To support the Get It On Time campaign and call on the NHS to introduce 15 minute mandatory staff training on Parkinson’s, you can sign Parkinson’s UK’s petition here.

For more information on Parkinson’s and hospital admissions, please visit the EPDA website.

People with Parkinson’s have always encountered difficulties in hospital, with non-specialist staff simply not understanding how important it is for them to get their medication strictly on time.