My mother didn’t know what Parkinson’s was, she just thought I was going to die 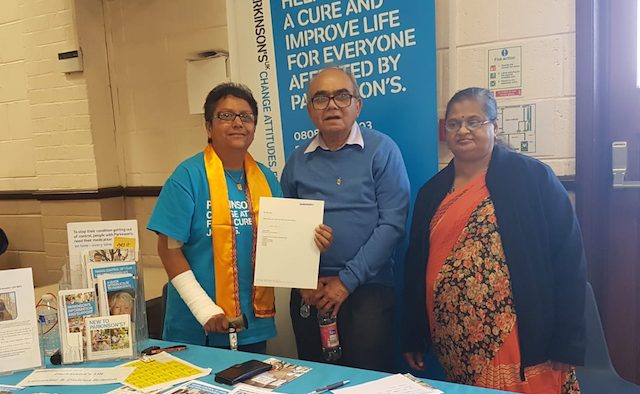 We hear from Parkinson’s campaigner Hema Reilly (left) in Leicester, UK, on why she’s trying to educate the South Asian community about the condition – and tackle the misconception that Parkinson’s is a “curse”

What were your first thoughts when you were diagnosed with Parkinson’s?

When I was diagnosed three years ago at the age of 51, I did the wrong thing. I googled it and scared myself witless.

I just knew the basics – that you get the shakes. I had a lot of panic and felt distressed but luckily for me, my family were with me. Eventually, with the help of my family, I told my mum, who was totally devastated. She thought Parkinson’s was a life sentence and that it was a curse.

Why do you think your mother perceives Parkinson’s as a ‘curse’?

My family are originally from India and it’s indoctrinated in older generations in Asian culture that if you get an illness, then you must have done something wrong. Or that it’s black magic or you’ve been cursed.

My mother didn’t know what Parkinson’s was, she just thought I was going to die. Trying to find information for her in the Indian language Gujarati was a nightmare. It’s so important to educate people that Parkinson’s is a neurological condition.

How did your community respond to your diagnosis?

I used to be the president of our Asian community group in Loughborough, Leicester. When I shared my diagnosis, people kept saying things like ‘God will make it better’. And I thought it’s got nothing to do with God, it’s not going to get better and there is no cure. That’s what they didn’t understand – and it’s why I’ve been so active in trying to educate the South Asian community.

What are some of the ways you’ve been raising awareness?

I’ve opened a support group called the Leicester Parkinson’s Café which my sister helps me run. I wanted to create a space for the Asian community where language and cultural needs wouldn’t be a barrier. I invite guest speakers to talk about Parkinson’s and then I translate. We serve Indian food too because you can’t have an Indian get together without food.

Last month, I organised the biggest event in Leicester for Navaratri – an annual Hindu festival which lasts nine nights. Every evening I gave a speech about what Parkinson’s is and we handed out leaflets and information. We raised several thousands of funds which all went towards Parkinson’s UK.

How has your life changed since diagnosis?

Prior to being diagnosed with Parkinson’s, I was working full time as a social worker. One day I had a fall and broke my hand – and things deteriorated from there. It was becoming too dangerous for me to work.

I had a brilliant manager who helped be get a great pension deal. I told them about my Parkinson’s straight away. A lot of people struggle with that, but more and more young people are being diagnosed now.

To suddenly be out of work with nothing to do was such a shock. I’ve been working since I was 16 and I’m not one for sitting around. That’s why I’ve got so involved with Parkinson’s community.

What’s your advice for anyone in the South Asian community who feels like they can’t tell people about their Parkinson’s?

One thing I struggled with was the side effects of Parkinson’s medication. I had suicidal thoughts and it was awful. It was my amazing therapist and getting involved with the community that helped pull me through. The more you mix with other people, the more you feel a sense of belonging.

You should be honest with yourself and be strong. There are people out there so talk to us and let us help you. We’re a family.

My mother didn’t know what Parkinson’s was, she just thought I was going to die