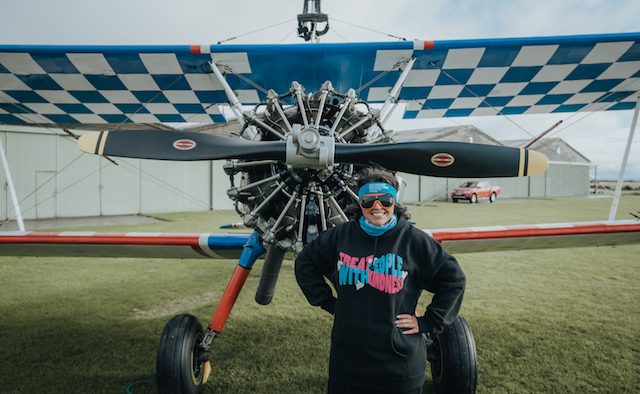 Parkinson’s campaigner Anne Twist, who is the mother of former One Direction star Harry Styles and influencer Gemma Styles, has raised over £10,000 for research into the condition this month. As part of the fundraising initiative for charity Parkinson’s UK, Twist was strapped to the top of a plane and flown over Gloucestershire, UK.

Twist, whose dad, Brian, lives with Parkinson’s disease, said: “It was a terrifying experience but I was really determined to push myself out of my comfort zone.

“I know that the support Parkinson’s UK provides to people with Parkinson’s, as well as for their families and carers, is invaluable, and it’s so important to fund the research needed to find better treatments for this devastating condition.”

She was joined for the fundraiser by her friend, Sandra Meighan, Parkinson’s campaigner Matt Eagles, and the director of engagement at Parkinson’s UK, Paul Jackson-Clark.

Earlier this year, Twist also announced that she would donate her brain to Parkinson’s UK Brain Bank to help further research into Parkinson’s disease. Former UK sports commentator Dave Clark, British writer Paul Mayhew-Archer and actress Sophie Thompson were among others to join the appeal.

Commenting on Twist’s longstanding support for the charity, Jackson-Clark said: “We are really grateful to Anne for her continued support through fundraising and volunteering for Parkinson’s UK, and we want to say a big thank you to her and Sandra for taking on such a daring and nerve-wracking challenge for the charity.

“Their amazing efforts help us drive forward the groundbreaking research we urgently need to transform the lives of people affected by the condition.”

Fans and members of Parkinson’s community took to social media to share their support for Twist.

@MrsAnneTwist hope your wing walk went well. Thank you for fundraising for Parkinson’s- it’s such an important charity to so many families. Sending love, thank you for what you do ❤️ means so much to my family x

Twitter user SOHAZZA donated to the campaign in memory of her grandfather, who had Parkinson’s disease:

.@MrsAnneTwist is going to wing walk for a Parkinson’s breakthrough. I sponsored Anne in memory of my Grandfather taken by this disease after a life time dedicated to helping others. You should too! https://t.co/arpprWzFl4

So cool Anne, and for such a great cause. I do hope there will be a major breakthrough. Prayers to you and everyone who has been affected by this vile disease. Hoping for a cure. Glad you’re safely back on the ground. All my love to you and your equally amazing family💜x

Over 380 supporters have so far donated to the campaign, doubling its initial target of £5,000, and raising funds for Parkinson’s disease research projects and support for people living with the condition. Find out more and donate to the fundraiser.

What would you do if you had one hour more a day?

A snapshot of World Parkinson’s Day around the world