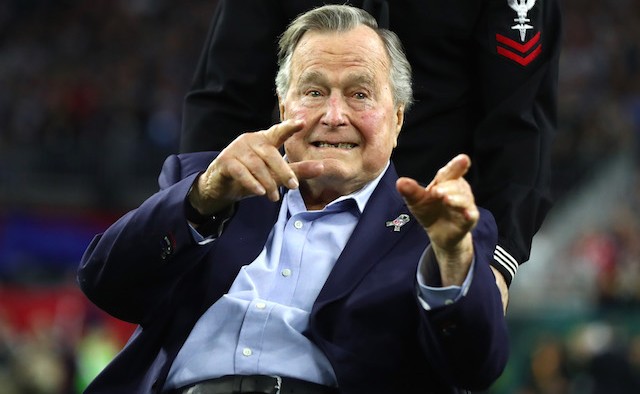 After living with vascular parkinsonism, a condition that mimics Parkinson’s symptoms, former US president George HW Bush died last week. We look at the differences between the two conditions – and the moving response to a viral image of Bush’s service dog Sully

Last week, the death of former US president George HW Bush from vascular parkinsonism led many to question the difference between the condition and Parkinson’s disease.

Parkinsonism is the umbrella term for conditions that mimic symptoms similar to those experienced by people living with Parkinson’s. Vascular parkinsonism can occur in people who have experienced a mild stroke, or have restricted blood supply to the brain. The condition causes symptoms similar to Parkinson’s – including rigidity, difficulties walking and problems with speech and memory.

While the symptoms of the two conditions are similar, vascular parkinsonism is not considered a progressive neurodegenerative disease.

Dr Michael Okun, professor of neurology at the University of Florida, US, said: “It can be tricky to differentiate Parkinson’s disease from vascular parkinsonism (due to stroke(s)). Many experts refer to stroke induced parkinsonism as lower body parkinsonism because it tends to affect the legs more than the arms. In practice the differentiation can be tricky and sometimes both entities actually coexist.”

Sully became former president Bush’s service dog in June 2018 and assisted the former president with tasks such as fetching items and opening doors. In a tweet earlier this year, Bush welcomed Sully to his family.

Service dogs like Sully can help people with Parkinson’s – and conditions with similar symptoms to Parkinson’s – in many ways, including helping them to balance, complete physical tasks and reduce the anxiety and depression that is often associated with the condition.

A great joy to welcome home the newest member of our family, "Sully," a beautiful — and beautifully trained — lab from @AmericasVetDogs. Could not be more grateful, especially for their commitment to our veterans. pic.twitter.com/Fx4ZCZAJT8

Talking to Parkinson’s Life earlier this year, Renee Le Verrier – who has lived with Parkinson’s for 13 years – described how her service dog Tommy helped her deal with her condition. She said: “I would love to see anyone who is dealing with the horror of being stuck inside – whether it’s because they are afraid of their movements or because of the stigma – consider a service dog.

“Having one makes everything more approachable. If people look at you, it’s not because you’re walking funny but because they’re looking at your dog. It becomes a friendlier way to go about your illness: it builds a bridge with other people.”