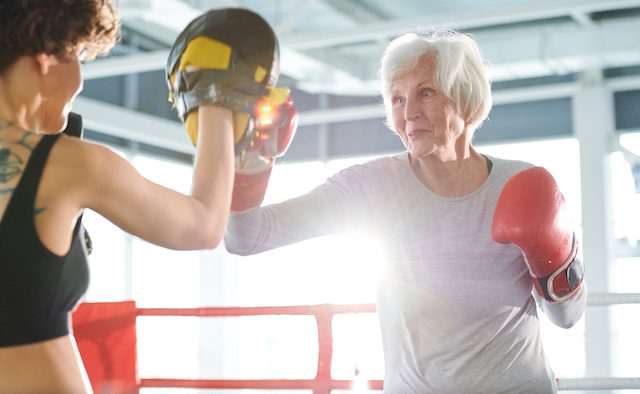 Research shows that regular exercise can reduce motor symptoms, slow the progression of Parkinson’s disease – and enhance the quality of life. But what are the best sports for people with the condition? We round up six activities that could help make a difference

Good balance, speed and hand-eye coordination are just some of the demands of non-combat boxing.

Although most of the evidence so far on the benefits of boxing for Parkinson’s is anecdotal, some small studies have found encouraging results. In one 2011 study, published in the journal ‘Physical Therapy’, researchers examined how six people with the condition responded to regular boxing sessions over 12 weeks. The results were promising, with participants showing short-term and long-term improvements in balance, gait and quality of life.

A recent three-year study by researchers in Canada – one of many to endorse the benefits of dancing – found that participating in weekly dance classes can slow the progression of Parkinson’s disease.

Whether it’s tango, tap, ballet or ballroom, stepping onto the dance floor could reduce both motor and non-motor symptoms of the condition.

Dance has been shown to help with flexibility, coordination, posture and balance, as well as confidence and mood. Choosing the right dance can help target specific symptoms. For example, tango may improve the ability to move forwards and backwards at varying speeds – while Irish set dancing, which requires dancers to change direction frequently, may improve freezing of gait.

Nordic walking is commonly described as cross-country skiing without skis or snow. It is a fitness technique in which walking poles are used to help you move forwards, working your upper body as well as your legs.

The poles create a swing in the arms, giving users a springy, lengthened stride. They also take the weight off the hips, knees and ankles, making this an ideal sport for those who experience joint pain.

Once the basic steps have been learned, the sport can enhance balance and coordination, correct posture and reduce gait problems. Studies have also shown that Nordic walking can improve quality of life.

Yoga is an ancient form of exercise that combines specific body poses with breathing techniques to aid strength, flexibility and relaxation.

For people with Parkinson’s, yoga may help reduce stiffness and slowness of movement, and also improve balance, flexibility and muscle strength. Many people report the calming effect of yoga, which can help lessen stress and benefit sleep in Parkinson’s.

In one small pilot study on the therapeutic effects of yoga in people with Parkinson’s, researchers found that taking part in yoga sessions twice a week for 12 weeks could result in more energy and visible tremor reduction.

New research has found that cycling may be as effective in treating Parkinson’s as medication.

The study, published in ‘The Lancet Neurology’, found that people with early-stage Parkinson’s who completed 30-45-minute indoor cycling sessions, three days a week for six months, saw an improvement in symptoms – similar to what could be achieved with medication.

From keeping your heart and lungs healthy, to lowering cholesterol and blood pressure, to boosting your immune system and mood – cycling has a long list of known health benefits.  The repetitive motion of pushing pedals can help to decrease tremors and stiffness, while increasing endurance, strength and coordination.

Playing table tennis has been found to alleviate the motor symptoms of Parkinson’s. The sport, also known as ping-pong, can keep players mentally alert, improve reaction times and increase strength and agility.

Using a racket involves a repetitive rotary movement which may also help those who struggle with rigidity. Some may also find that table tennis can reduce tremors.

In one study conducted by researchers in Japan, 12 people with Parkinson’s were recruited to play a five-hour table tennis session, once a week for six months. The results showed improvements in posture, rigidity and slowness of movement, facial expression, speech, handwriting – as well as in completing daily activities such as getting out of bed and getting dressed.

“We want the feeling of togetherness to take centre stage”