“It’s important for younger people to overcome feelings of isolation and stop thinking there’s no one else like this around them. There are – it’s just a question of connecting us all.” 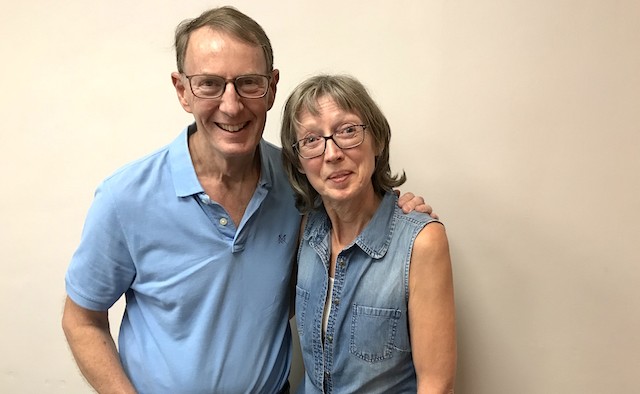 What is the Fighting Fit programme?

What inspired you to start the programme?

P: Laurel and I took a trip to the European Parkinson Therapy Centre in Italy and that’s where the idea for Fighting Fit was born. The therapy sessions had an immersive, holistic approach – and we wanted to bring that back to the UK. It was actually Parkinson’s UK who recommended we target working-age people with Parkinson’s – as there’s very little support out there.

L: I was diagnosed four-and-a-half years ago – and I remember what a lonely place it was at first. I felt isolated and I didn’t know anything about Parkinson’s, so I had to do a lot of digging. I want to try and share what I’ve learnt over the past four years with other people who have struggled to come to terms with their condition.

Why did you want to focus on younger or working-age people with Parkinson’s?

L: The majority of people who are diagnosed with Parkinson’s are over 50. Older people might have already left the world of work and can take things at their own pace.

If you’re still focussing on work and bringing up a family, perhaps even caring for your own elderly parents, there are far more complications. It’s also a lot more difficult for younger people because they have to spend a greater portion of their lives with Parkinson’s.

It’s important for younger people to overcome feelings of isolation and stop thinking there’s no one else like this around them. There are – it’s just a question of connecting us all.

What’s going to happen during the programme?

L: We’re going to explore what support is out there for people who are still working out their condition. Working with Parkinson’s brings in a whole different raft of problems. We’ll be running interactive sessions where people can discuss issues at work as a group and share tips and tricks about the workplace. There’ll be information about rights at work, the responsibilities of employers, a talk on assistive technology and a session on family relationships.

Who delivers the programme?

P: For some sessions we’re using qualified specialists – such as physiotherapists, relationship counsellors and benefits experts. However, for the general running of the programme we’ve got people with Parkinson’s – people like me.

What role does exercise and keeping fit play in the Fighting Fit programme?

P: There’ll be taster sessions each day – on various types of exercise like tai chi, PD Power, and boxing – with a neuro-physiotherapist explaining the importance of exercise. We also have separate sessions focussing on exercise and neuroplasticity, as well as dancing and singing.

You mentioned assistive technology – do you think technology can help people with Parkinson’s?

L: There are definitely practical ways that technology can assist you in work. For example, I’m finding it increasingly hard to use a keyboard – but there are special types of keyboards for people whose dexterity is being challenged. There’s also wearable technology – like the Apple Watch – which has the ability to record Parkinson’s symptoms. This means when you go to see your neurologist they have a better idea of how to tweak your medication.

I’m actually testing some wearable technology right now for Parkinson’s UK – it looks a bit like a Fitbit.

How do you think the programme is going to help working-age people with Parkinson’s take control of their lives?

What are your hopes for the future of Fighting Fit?

P: If the programme is successful in Buckinghamshire, UK we plan to set it up as a charity and then run it for eight or nine months of the year. If it’s successful after that – we are looking to roll it out across the whole of the UK.

“It’s important for younger people to overcome feelings of isolation and stop thinking there’s no one else like this around them. There are – it’s just a question of connecting us all.”

Watch this exclusive exercise video that may help your symptoms