Parkinson’s affects everyone differently. While hypomimia may be very noticeable in some individuals, others may experience more subtle changes in their facial expressions 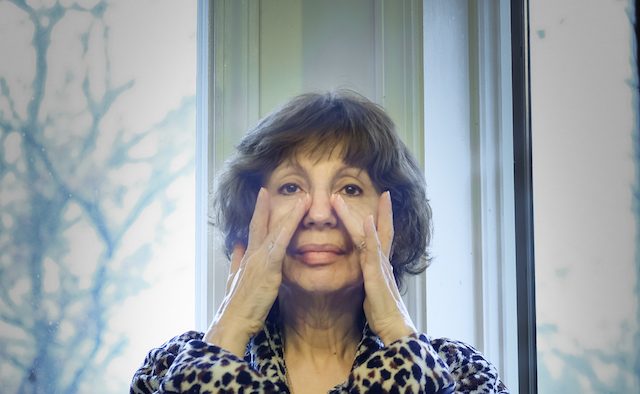 Hypomimia, or ‘facial masking’ is a common Parkinson’s symptom – but why does it affect people with the condition? Dr Judith Bek, a postdoctoral researcher at the University of Manchester, UK, shares expert insights, and explains how the symptom can be treated

Hypomimia – also known as “facial masking” – is a loss or reduction of facial expressiveness, including emotional expressions. It is a common symptom of Parkinson’s and is characterised by slower and less pronounced facial movements.

Reduced facial expressiveness can occur in people living with neurological conditions, suffering from depression or other conditions that cause emotional blunting.

What causes hypomimia in people with Parkinson’s?

Hypomimia is thought to be caused by a loss of motor control that affects the movement of muscles in the face as well as elsewhere in the body. Facial expressions may be slowed or reduced in size, in a similar way to how general movements are affected in Parkinson’s.

Parkinson’s affects everyone differently. While hypomimia may be very noticeable in some individuals, others may experience more subtle changes in their facial expressions.

Can hypomimia be used to detect Parkinson’s?

Hypomimia is not used on its own to detect Parkinson’s, but it is one of the symptoms assessed within clinical evaluation. For example, it is included in the Unified Parkinson’s Disease Rating Scale ­­– one of the most common rating scales for the condition.

However, sensitive measures to detect subtle changes in facial movements are being developed, such as using smartphone cameras. In the future it is possible that tools to detect hypomimia could be used to assist in Parkinson’s diagnosis.

How can hypomimia impact the life of people with Parkinson’s?

The loss of facial expressiveness can negatively impact social interactions and relationships, particularly when combined with other symptoms such as speech difficulties and changes in body language or gesturing. The person’s ability to physically express thoughts and feelings is reduced, and others may have difficulty in understanding them or may misinterpret them – for example, thinking they are unhappy because they do not smile. Hypomimia could also affect a person’s confidence to go out or participate in activities.

Alongside a reduction in their own facial expressions, people with Parkinson’s can also find it difficult to recognise emotions from other people’s expressions. Research has suggested that these two issues may be linked, in that we understand others’ actions and emotions by internally “simulating” their movements. If our own facial movements are reduced, this may affect the ability to simulate and interpret others’ facial expressions.

Are there any medications or therapies that can treat hypomimia?

Movement problems in Parkinson’s are usually treated with levodopa or a dopamine agonist medication, which can improve symptoms, but side-effects can also occur. Medications are specifically tailored to the individual according to their symptoms and how well they respond. Dopaminergic medications can reduce muscle rigidity, which should help to improve facial movements.

Facial exercises are sometimes used to try and improve symptoms of hypomimia. These may help to ease rigidity and may also encourage a person to think more about how they are moving their face.

Other non-medical therapies for hypomimia are also being developed and tested by researchers, such as using mimicry or recognition of other people’s expressions. Activities that encourage expressivity, such as dance, singing, or drama, may also help people with Parkinson’s to improve their facial expressions.

To learn more about Parkinson’s symptoms, visit the EPDA website.

Dr Judith Bek is a postdoctoral researcher in the Body Eyes and Movement (BEAM) lab at the University of Manchester, UK. Her research focus is on the relationship between perception and action in Parkinson’s, and healthy ageing. This includes investigating how people are influenced by seeing another person’s movement and the effects of imagined movement on physical actions. She is also interested in the impact of creative activities on the movement and wellbeing of people with Parkinson’s.

Parkinson’s affects everyone differently. While hypomimia may be very noticeable in some individuals, others may experience more subtle changes in their facial expressions

The initiative could save £10m to reinvest in care services