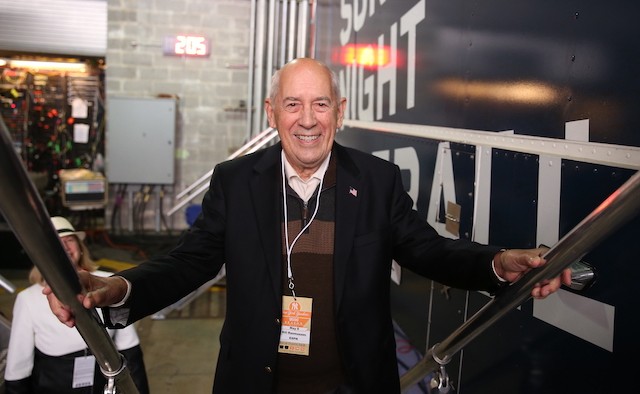 ESPN founder Bill Rasmussen has opened up about his Parkinson’s diagnosis, vowing to use his platform to raise awareness and “help others who are impacted” by the condition

Bill Rasmussen – founder of US sports network ESPN – has announced that he has been living with Parkinson’s for the last five years.

In an article titled ‘I have Parkinson’s Disease’ on the ESPN Front Row website, the US businessman opened up about his battle with the condition – and his reasons for keeping his diagnosis private for so long.

He said: “I didn’t feel anything different in my daily life and saw no reason to discuss the topic outside of normal family discussions about health matters. As the months and years passed though, I did indeed start to notice little differences in my physical abilities and learned more about PD – that’s when I made the decision to share my story with fans, athletes, teams, sports, businesses and hopefully stir the collective, creative geniuses among us to successfully attack this progressive brain disease.”

Rasmussen – who founded ESPN with his son Scott in 1979 – vowed to use his platform to raise awareness and join the fight for a cure.

“Today, a cure for Parkinson’s remains elusive,” he said, “but by raising awareness, I hope thousands will bring new interest, new talent, new research and new dollars to bear on this insidious disease.”

“I’ll be talking a lot about PD in the weeks and months ahead – not as a victim, but as living, breathing proof that when you or a loved one hears the dreaded words, ‘You have Parkinson’s disease,’ life is not over – it’s just the beginning of a new chapter.”

Following the news, friends, fans and members of Parkinson’s community took to social media to praise Rasmussen for his openness and honesty.

Parkinson’s advocate John MacPhee thanked Rasmussen for sharing his story and helping to educate people about the condition.

Hi Bill, thanks for sharing your diagnosis. Its important that knowledge and understanding of #parkinsons is as widespread as possible. Welcome to the club that no one wants to join!

One of the greatest joys of working at DePauw University for the past 19 years has been getting to know one of our most amazing alumni, @espn founder @Bill_ESPN Rasmussen. He is now a dear and close friend & today shared broadly a very brave announcement. https://t.co/A930aSgd1w

There are a lot of people behind you and supporting you in this fight, Bill. Best of luck. Your positive outlook is an inspiration!

Rasmussen served as ESPN’s first president and CEO, but was removed from the position and left the company in 1980. Despite leaving ESPN, he has remained a significant figure in the brand’s history and remained closely associated with the network.

On 8 September, Rasmussen is due to throw the ceremonial first pitch alongside current ESPN president Jimmy Pitaro at the start of the Boston Red Sox v New York Yankees baseball game.