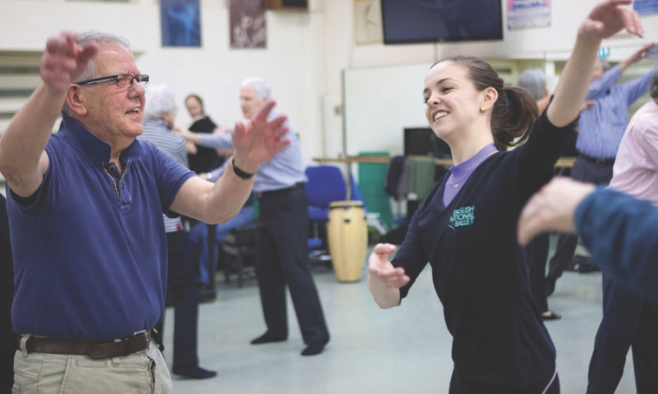 Dance for Parkinson’s is an exciting new dance initiative run by the English National Ballet to help people combat the movement difficulties most commonly associated with Parkinson’s. Beyond the physical improvements, however, people with Parkinson’s – and their carers – are discovering other benefits such as renewed confidence, friendship and the support of others in Parkinson’s community

For most of us, ‘going to the ballet’ means getting dressed up and treating ourselves to a night of breathtaking artistry from world class dancers and choreographers. For an increasing number of people with Parkinson’s (PwPs), however, it also involves attending a weekly class where they are trained in classical techniques, and may rub shoulders with a prima ballerina during the session. This is no standard ‘dance therapy’ class, but English National Ballet’s (ENB) Dance for Parkinson’s programme, which has blazed a trail with its proven social, psychological and physical benefits.

The seeds of the initiative were sown in 2008 when ENB’s director of learning, Fleur Derbyshire-Fox, hosted a seminar and introduced US-based Mark Morris Dance Group and Brooklyn Parkinson Group’s Dance for PD programme, which was presented by Dance Umbrella.

Dance for PD was established in 2001 by Brooklyn-based dancer Olie Westheimer. Originally intended as a support group for her husband (Dr Ivan Bodis-Wollner, director of the Clinical Center of Excellence for Parkinson’s Disease at New York’s King’s County Hospital), the dance programme has been replicated in more than 50 communities around the world.

Derbyshire-Fox describes how experiencing the seminar and watching the Dance for PD film presentation was “like a thunderbolt. I realised that here we were [at ENB] with a beautiful dance studio, and that it would make sense with our national remit and the resources we can offer to extend our work in this way.” 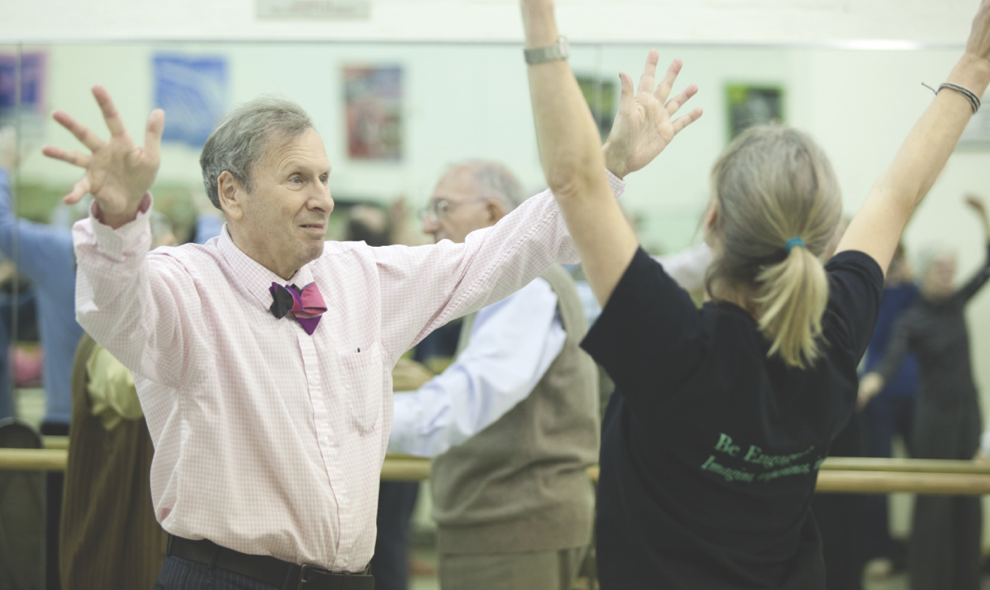 Building on the goodwill developed during a long relationship with Westminster City Council in London, Derbyshire-Fox succeeded in accessing funding for a 12-week pilot project. She also approached Dr Sara Houston and Ashley McGill from Roehampton University to conduct a thorough research study of the pilot, which involved examining physical data (using measurements including the Fullerton Advanced Balance scale and postural analysis) complemented by individual and group interviews and diary entries.

The “statistically significant” findings revealed short-term physical improvements, along with anecdotal evidence that ballet classes had helped give participants the confidence to access skills they didn’t know they had.

The pilot course consisted of two six-week sessions, with Christmas – and a visit to the London Coliseum to see Romeo and Juliet – in between. At the end of the 12 weeks, the participants were thrilled – as was Westminster Council.

Says Derbyshire-Fox: “A funder wants to know whether there’s a demand, whether there’s a benefit, and whether you are contributing to knowledge in the sector. Because of the research findings, we were able to prove all of this, and we were granted funding for another term.”

So what does a Dance for Parkinson’s class involve? What it is not, the organisers are at pains to point out, is a dance therapy class. ENB’s repertoire is at the core of the programme and participants will go to see a performance of a particular piece, which then provides the theme for the rest of the term. Classes are peppered with technical terms, and participants will discuss pliés, arabesques, port de bras and glissés, as they would in any ballet class. But, as a result of the training, the teachers have an insight into the specific needs of their audience.

“One perhaps unintended consequence of the class has been the benefit to carers, many of whom accompany their partners to the group” 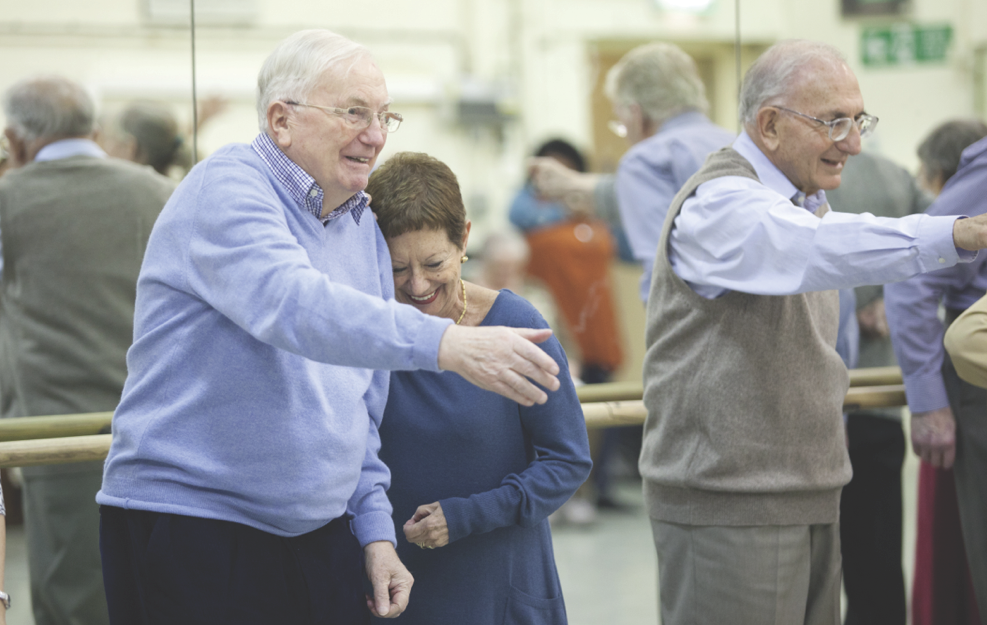 Benefits for dancers and partners

Danielle Jones, learning and participation officer at ENB, says: “With every one of our exercises, we have in mind an understanding of the benefits. For people who are struggling with freezing, vertigo and falling, we do a lot of work on grounding weight and pulling the centre of gravity into a stable standing position. We also show people how to find their own alignment to give them confidence to work independently.” She explains how using characters from the repertoire can help demonstrate the quality of a movement – people with dyskinesia, for example, respond well to being asked to move as a particular person in a story. “Focusing on character helps them to overcome physical barriers,” she says.

The quantitative results of the pilot study showed that the group as a whole made significant improvements to their balance. The qualitative results included an increase in confidence and body awareness, which, in turn, had a positive effect on general mobility in daily life. Nick Ephgrave from Parkinson’s UK, for example, details the improvements in non-motor symptoms for PwPs (see ‘Beyond physical benefit’ below).

One perhaps unintended consequence of the class has been the benefit to carers, many of whom accompany their partners to the group. Often isolated in their role, here they get to meet other carers, and see first-hand the benefits experienced by their partner. They are also encouraged to join in the dancing, which can blur the lines between ‘carer’ and ‘cared for’. Says Derbyshire-Fox: “Dance is an inclusive practice, and if you are attending the class with your carer, there is equality. Here, everyone is a dancer, and no one has more power than the other.”

“Dance is inclusive. Everyone is a dancer, and no one has more power than the other” 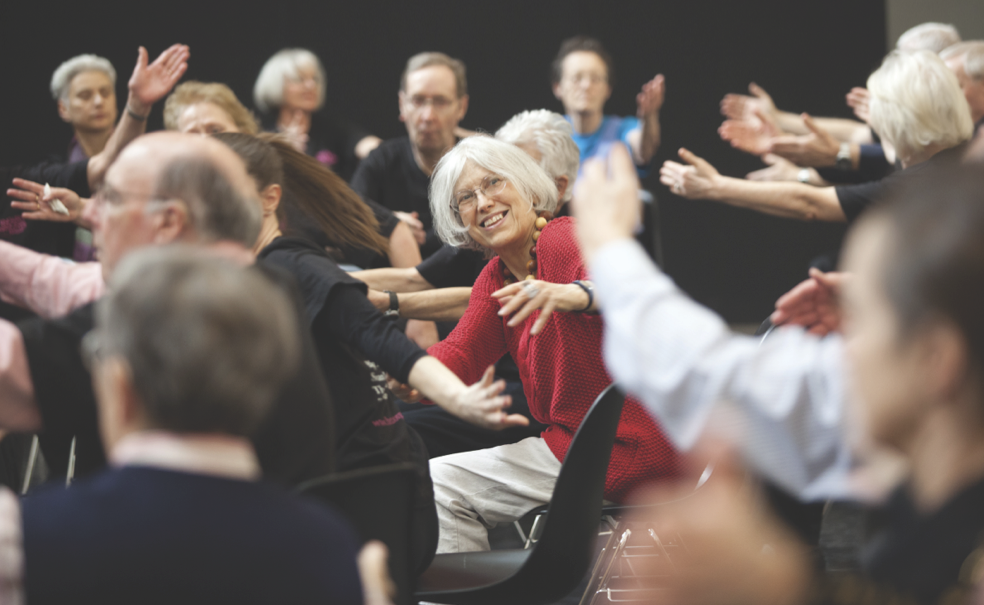 Although ENB is based in London, Derbyshire-Fox and her team have managed to achieve funding support from the Paul Hamlyn Foundation to roll out the programme to out-of-town partner hubs. Derbyshire-Fox’s team has also succeeded in securing funding to extend the research with Roehampton University and inspired a number of volunteers from Oxford Brookes University to help with the project.

Despite the potential for growth, Derbyshire-Fox isn’t planning world domination quite yet: “It has to be about quality, rather than quantity,” she says. “I wouldn’t want to run another class without the right support mechanisms in place. The environment is very important – it has to be in a dance studio with live music so our members feel they’re coming to a professional ballet class.”

That said, she is very keen to share ENB’s model with other countries. “I believe in sharing and people taking what they need. I’d encourage people to come and look at what we do, train with us, and develop it in their own way.”

The success of ENB’s Dance for Parkinson’s initiative seems to be down to a combination of enthusiasm, skill and sheer hard work. Although inspired by the Mark Morris Dance Group’s Dance for PD, theirs is an independent and unique programme with the ballet repertoire at its core. Its team of dancers and support workers not only help PwPs manage the physical symptoms of their condition but also bring the spirit of the ballet’s story to life through performance.

Being a ballet dancer is a dream for many youngsters, one that is usually left behind when the world of work and ‘real life’ gets in the way. Through this programme, ENB is enabling PwPs to live the dream, connect with other people and achieve something that would be the envy of many.

“The benefits experienced by the Dance for Parkinson’s participants reach far beyond the physical – a genuine community has sprung out of ENB. Of course there are all the physical benefits of dance and ballet – but the simple act of coming to an event they enjoy on a weekly basis… that’s priceless.”

“We’ve only been going for eight months but it feels like we’ve been there forever. It really feels like it’s come at the right time and we feel so blessed to be a part of it. The teachers are really wonderful – I can’t praise it enough.”

– Caregiver who attends with her partner

“I think it’s quite good psychologically – it does lift your spirits. I look forward to going every week because we meet the same people and have got to know some of them. Also the ballerinas are very good – they’re very enthusiastic and there’s a really lovely atmosphere.”

– PwP who attends the class with her husband

This article originally appeared in Parkinson’s Europe Plus.