The fact that he continued to do what he loved […] is a reminder that whilst Parkinson’s can devastate lives, it doesn’t have to 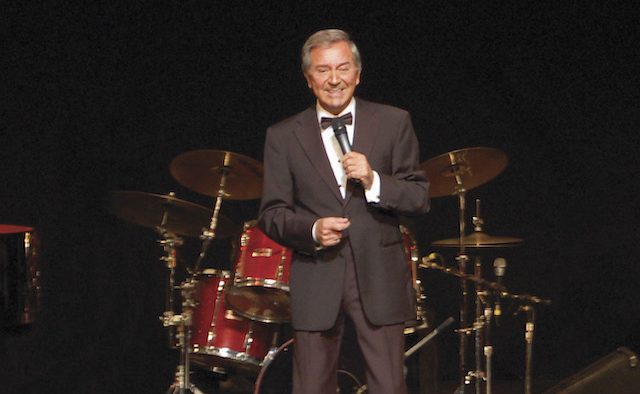 Des O’Connor was living with Parkinson’s disease at the time of his death in November last year, his wife Jodie Brooke Wilson has confirmed.

The 88-year-old English comedian, singer and famed TV presenter left behind a legacy of over 45 years hosting television shows, including ‘The Des O’Connor Show’ and ‘Des O’Connor Tonight’.

Speaking with the UK tabloid ‘Daily Mail’, Wilson shared that her husband had been diagnosed with Parkinson’s disease in 2017, but that he first noticed tremors in 2012 without linking them to the condition.

“He remembers doing The Wizard of Oz at the London Palladium when he was playing the wizard,” she said. “He remembers sitting in the hot-air balloon and looking down at his hands and seeing a tremor.”

O’Connor chose to share his diagnosis with only immediate family and faced the news with a positive outlook. “Des dealt with it very privately,” said Wilson, who married the TV icon in 2007. “He didn’t want people to feel sorry for him and for it to be what they first thought about when they saw him.”

“When he was told, he was very upbeat about it,” she recalled. “He dealt with it, saying, ‘Yes I’ve got it, but I’ll keep taking the tablets and keep smiling.’ That’s what he did: took the tablets and kept smiling.”

Steve Ford, chief executive of charity Parkinson’s UK, viewed O’Connor’s experience with the condition as a source of inspiration. “He showed that you do not need to be defined or held back by a diagnosis,” Ford said. “The fact that he continued to do what he loved, by entertaining us all and keeping his humour throughout, is a reminder that whilst Parkinson’s can devastate lives, it doesn’t have to.”

O’Connor passed peacefully in his sleep in hospital.

While UK Covid-19 regulations meant only 30 people could attend the funeral, Wilson was content with the “intimate service filled with love and respect”. Along with the “laughter and sadness and joy” honouring O’Connor at his funeral, tributes were paid to the entertainer across social media.

UK actress Vicki Michelle MBE tweeted “heavenly” wishes to the TV star on what would have been his 89th birthday:

A legend has left us

The fact that he continued to do what he loved […] is a reminder that whilst Parkinson’s can devastate lives, it doesn’t have to