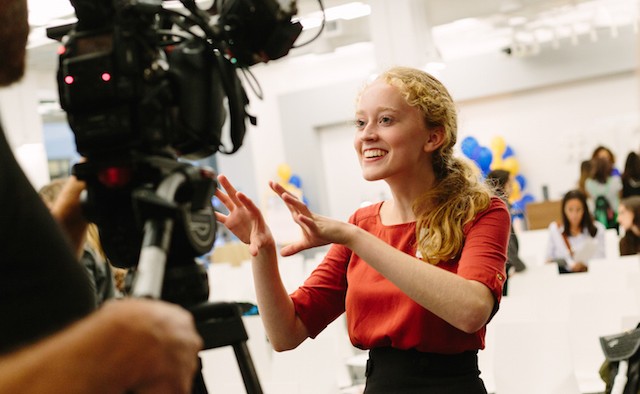 Erin Smith, US creator of the diagnosis tool FacePrint, has just been named a finalist in the 2022 Young Inventors Prize – which recognises outstanding initiatives by inventors under 30. When we spoke to her, the young inventor told us about being hooked on science early on, partnering with the Michael J Fox Foundation and her inspiration behind the idea

For a really long time, I’ve been curious about different things in the world and I’ve used science research as a mechanism to try and find answers to my many questions. Over the past two years, I’ve been working on Parkinson’s related technology.

What exactly is FacePrint?

How did you come up with the idea?

I came up with the idea two years ago after watching a video about Parkinson’s by The Michael J Fox Foundation. I noticed that whenever Michael J Fox or another person with Parkinson’s would laugh or smile, it came off as emotionally distant. As I started reading through past medical papers, I found that the parts of the brain that change after the onset of Parkinson’s were also used for forming facial expressions.

What did you do next?

I collected preliminary facial response videos from 18 Parkinson’s patients and also people who did not live with the condition. From those videos I was able to identify that there was a difference between facial expression movements within these two groups. I contacted The Michael J Fox Foundation explaining my idea and then began working with them to launch my first study in which I expanded my data collection to about 300 people.

I then taught myself to code using books, YouTube tutorials and online classes. From there, I was able to develop my first set of algorithms that could determine whether somebody had Parkinson’s at an accuracy level of 88%.

Over the past year, I have launched a large-scale international study with The Michael J Fox Foundation and the International Essential Tremor Foundation. I’m hoping to use these results to get the accuracy rate for the tool into the high 90% range.

How does it feel to have created such an exciting tool at such a young age?

The one thing that I’ve learnt over the years is that age shouldn’t be a limitation to having ideas and working towards turning those ideas into tangible technologies. I think young people often have a really unique way of viewing the world and so we need to leverage our ideas and opinions to start progressing towards solutions to some of the most pressing global issues such as Parkinson’s.

How did you become interested in science and technology?

When I was growing up, my mum and I turned our kitchen into a little makeshift science laboratory. We’d spend hours doing little experiments and trying find answers to my constant questions about the world. I think this type of hands-on exploratory learning became my mentality towards education – and my later interests in science, technology and research.

Were you aware of Parkinson’s before watching that video by The Michael J Fox Foundation?

I knew of the condition, but it was through watching the video and conducting further research in my local area – Kansas, US – that I became more aware of the specifics. As I started working one-on-one with local people living with Parkinson’s, I gained a better understanding of the condition from a human perspective.

How did you find out about Parkinson’s groups in your local community?

It was actually really easy. We have a few really strong lunch groups in my local town and also a boxing programme for people living with Parkinson’s. I sent out emails to the two groups asking for their help and they’ve both been a huge support throughout the whole process.

Could you tell me a bit more about your partnership with The Michael J Fox Foundation?

The Michael J Fox Foundation has been a huge support and large resource throughout this process. I’ve been using The Michael J Fox Foundation online trial finder – a platform which connects people who are interested in helping in Parkinson’s research with clinicians, researchers and universities. It’s a great way for me to gain access to patients and collect the data necessary to develop FacePrint.

What are you hoping to achieve with the technology behind FacePrint?

My ultimate hope is that it will transform how Parkinson’s and other neurodegenerative conditions are identified and screened – and that it can be used to develop better treatments. I hope FacePrint will be one piece in the larger puzzle of ultimately curing Parkinson’s.

Have you won any awards with FacePrint?

Yes – I won an award at the Intel International Science and Engineering Fair and I was also the winner of the International BioGENEius Challenge. I’ve won a few other local and national competitions as well.

I was also recently awarded a Thiel fellowship which is given to 20 young innovators from around the world and provides support and mentorship to help them continue working on an idea or project.

What are some of the ways you plan to develop the technology?

One of the things I would like to achieve with FacePrint is to make the facial recognition technology compatible with that used by social media platforms such as Snapchat or Facebook and the new iPhone X. I think it’ll be really neat if someday these tools could be integrated with FacePrint and this would provide a really powerful way of screening for Parkinson’s and other conditions.

How have people with Parkinson’s responded to FacePrint so far?

So far, we’ve had a fantastic response. One of my favourite parts of this process has been meeting so many amazing people with Parkinson’s that I’ve become friends with. I’m still in contact with a lot of them today and they continue to reach out and show support.

Where do you see yourself in 20 years?

I hope to be working on solving some of the most pressing global issues, specifically within healthcare, and continue to create technologies that help alleviate human suffering.

This article was first published 13 September 2018.

Why Colonel Guy Deacon is travelling across Africa to raise awareness