People told me to have a break but I just thought, do people with Parkinson’s get to take a break? No, they don’t. 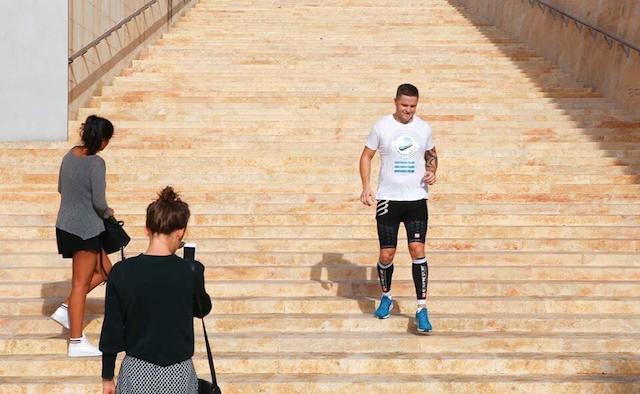 We talk to Chris Mamo, the personal trainer who spent 12 hours continuously running up and down the City Gate steps in Valletta, Malta to raise money for Parkinson’s.

Having gained a reputation as ‘the man who does crazy physical challenges’, Chris discusses the physical and mental difficulties he faced – and how the president of Malta joined him for the first and last lap

How did you come about this challenge?

I complete crazy physical challenges for organisations who don’t necessarily get funding or who are not well known. This year, Natalie Muschamp, the organiser of the Maltese charity Step Up for Parkinson’s, contacted me.  She wanted me to help her raise money – so we sat down and we came up with the idea for this challenge.

If it was up to me I would have walked up the stairs for 24 hours, but my marketing man held me back a bit. He keeps me under control and suggested I just do 12. It’s fair to say I’ve developed a bit of a reputation on the island as ‘the man who does crazy physical challenges’.

What motivated you to start taking on physical challenges?

It goes back a few years, when I lost my sister to cancer. I spent those last nights in hospital, sleeping on a chair next to her. I then discovered that in the local paediatric unit there was 20 bedrooms where terminally ill children stayed, with their parents sleeping on those same uncomfortable chairs for weeks or months at a time. I decided to run 20 marathons in 20 days to raise money for the 20 hospital beds, so that their parents could at least get a comfortable night’s sleep during such a difficult time.

When Natalie contacted me asking if I wanted to take on another challenge, but for Parkinson’s, I said yes, because I love doing them. 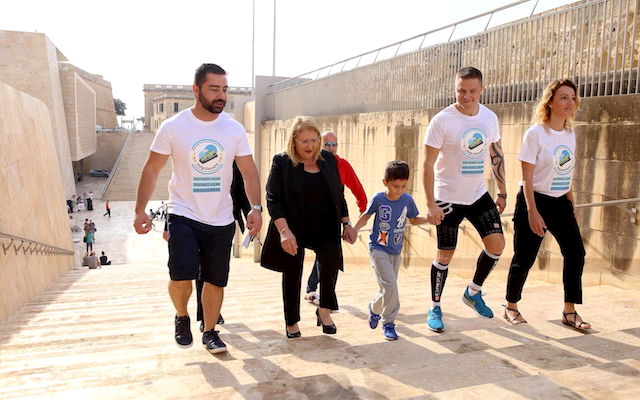 How did the City Gate steps challenge go?

It was fun, there was music throughout the day, people were coming and going ­­– and seeing all the donations coming in kept me motivated. People who had Parkinson’s or had family with Parkinson’s came and ran with me. It was amazing hearing their stories and it encouraged me to keep going. The president of Malta even came and did the first and last lap with me.

Halfway through my body was really starting to hurt and I was absolutely exhausted. It became a mental challenge more than anything else ­– and by the last hour I was a complete mess. I didn’t even stop for one bathroom break. If I was eating or drinking I did it on the go. People told me to have a break but I just thought, do people with Parkinson’s get to take a break? No, they don’t.

In the end I did over 40,000 steps, raised over EUR €5,500 for Parkinson’s and saw the awareness around Natalie’s charity go through the roof.

Do you think the fact you spent so many years in the army helped you physically and mentally?

Certainly mentally – because of the discipline. In the military you’re put through intense physical and mental strain, so the whole way through I kept reminding myself that I’ve been through way worse than this.

Why the City Gate steps?

Well, firstly it was a very big set of steps, and secondly, it funnels through lots of people because it’s a real tourist hotspot. Valletta was also the European Capital of Culture ­in 2018, which is why I specifically left at 8:18 in the morning and finished at 20:18 at night.

What are your future fundraising plans?

Next year, I’m going to undertake my biggest challenge yet. I’m doing it for the Beating Hearts Foundation, for children with heart problems. I hope to include Step Up for Parkinson’s in the fundraising, possibly as a sponsor so we can continue to raise awareness for the organisation.

People told me to have a break but I just thought, do people with Parkinson’s get to take a break? No, they don’t.

Workout in the wilderness with leading Parkinson’s health professionals

Sign up for this intensive Parkinson’s retreat in Ontario, Canada