This dish is based on a simple premise. The bread acts as a vessel for catching all the great broth, filled with nutrients and flavour from braising the greens

When Chris Cosentino – a chef based in San Francisco, US – debuted on the US reality TV show ‘Top Chef Masters’, he was competing on behalf of the Michael J Fox Foundation for Parkinson’s Research. As the winner of the show’s fourth season, he raised US $141,000 for the charity.

Cosentino said that competing on behalf of the Michael J Fox Foundation was a way to honour his uncle, who lived with the condition – and use his passion for cooking to help fund research and increase awareness.

“This dish is based on a simple premise,” says Cosentino. “The bread acts as a vessel for catching all the great broth, filled with nutrients and flavour from braising the greens.”

He adds: “This is a classic old-school way of cooking greens to get the best out of them. Bitter greens are great for you. They have so many nutrients, aid in reducing inflammation and aid in digestion.” 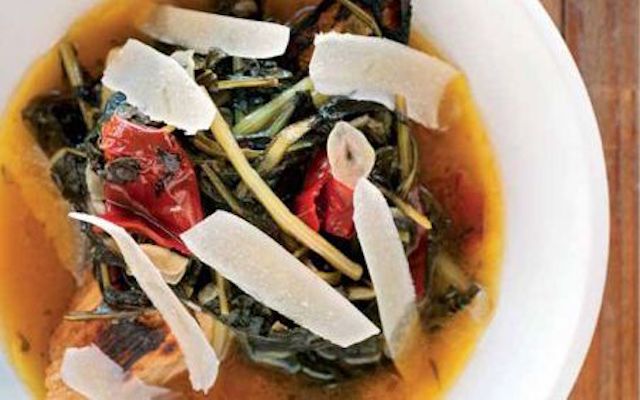 5 dried chilli such as guajillo, seeded

Wedge of pecorino cheese for shaving

This dish is based on a simple premise. The bread acts as a vessel for catching all the great broth, filled with nutrients and flavour from braising the greens