The money we raise is the hook – it gets people in – but you can make a bigger impact by changing the way you see the world. 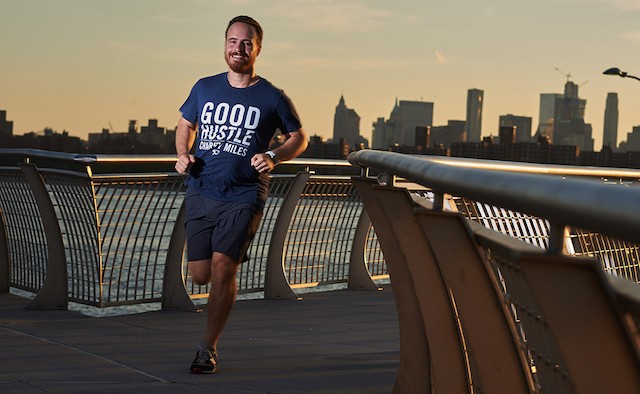 We spoke to Gene Gurkoff – the founder of the innovative fundraising app Charity Miles. He explains how his grandfather’s Parkinson’s inspired his work – and why he wants people to change the way they see the world

Tell me a bit about yourself.

I live in New York City, US, and I’m the founder of the app Charity Miles, which enables you to walk, run or cycle whilst raising money for the charity of your choice.

What was your inspiration for the app?

My grandfather was diagnosed with Parkinson’s when I was at college. He was such a huge part of my life, so I wanted to do something to support him. I started to run marathons to raise money for the Parkinson’s Foundation and wanted to get sponsored.

When iPhones came out in 2007, I saw how much companies wanted to connect with people through their phone. Put simply, I thought if I got on one side of the phone, and they got on the other, we could start sponsoring each other.

How successful has the app been?

So far we’ve raised over US $2.5 million for charity, and that’s not just limited to Parkinson’s. We’ve got 40 charity partners and just about every charity wants to be a part of it. I wish we didn’t have to have a waiting list. Over two million people have used the app since we launched it in 2012, so it’s grown incredibly fast.

Was your granddad around to see the launch of Charity Miles?

He was and he was so proud. He passed away this year at the grand old age of 96. He led a long and great life, most of which was probably down to him being incredibly active. Even in his later years him and my grandma would ride their tandem bike together to keep fit.

How many marathons have you done for Parkinson’s?

I’ve realised actively trying to decrease your risk of getting diseases like Parkinson’s may have a far greater impact than just raising thousands of dollars for it. After creating Charity Miles I started walking to work every day. I began to tell myself a story about what health means to me and I thought about my grandfather. It totally changed my mindset – I really started to appreciate my health.

The money we raise is the hook – it gets people in – but you can make a bigger impact by changing the way you see the world and staying active. Charity Miles encourages you to do that.

How did you get involved with Team Fox?

I was actually one of the founding members. I saw that other charities had their own charity teams and I thought since there was one for cancer, there should be one for Parkinson’s. I started doing some legal work for the Michael J Fox Foundation (I’m a lawyer by profession) and raised money by running marathons on the side. A year later, Team Fox was launched.

What do you want to see happen in the Parkinson’s community?

I obviously want to see a cure, but I really want more people to realise the importance of staying as active as possible. There are so many amazing people in the Parkinson’s community who are changing the perspective of what it means to have Parkinson’s. Campaigners like Jimmy Choi and Bill Bucklew are making people think that Parkinson’s is a disease that turns you into a superhuman!

What would you say to someone considering downloading Charity Miles?

Do it! Downloading an app may seem insignificant but it’s actually remarkable. Most of the time the companies who sponsor us don’t even use the app. To actively take your phone and download an app and then actually use it is momentous. You’re helping people by doing it.

For more information on the motor symptoms of Parkinson’s please visit the EPDA website.

5 of our favourite apps for people with Parkinson’s

The money we raise is the hook – it gets people in – but you can make a bigger impact by changing the way you see the world.