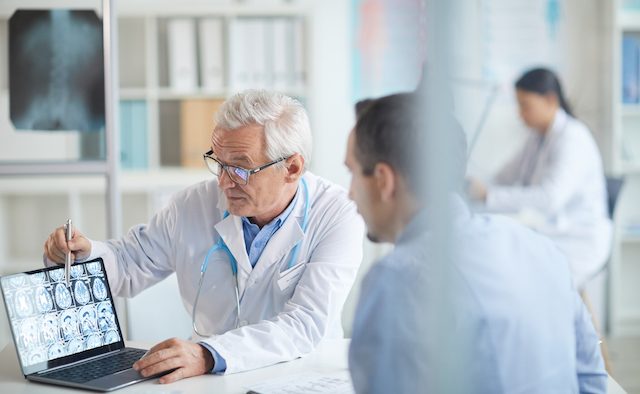 Funded by the EU Horizon 2020 research and innovation programme, the four-year TreatER project, which is now coming to a close, has united 11 public and private sector partners from five European countries to help develop a better treatment for Parkinson’s disease.

The project’s focus has been to conduct the world’s first in-human clinical study to administer the protein CDNF (cerebral dopamine neurotrophic factor) to people with Parkinson’s disease. The protein is administered using a neurosurgically implanted drug delivery system – which helps control the rate at which a drug is released and where it is released.

In August, Finnish pharmaceutical company and the study’s formal sponsor Herantis Pharma reported that the CDNF Phase I-II study had met its primary targets for safety and tolerability. We share key insights on the trial’s findings from a recent webinar by Herantis Pharma.

In people with Parkinson’s disease, 70 to 80% of dopamine-producing cells in the brain – which help control movement and balance – gradually deteriorate and are lost.

Unlike the symptomatic treatments currently available for Parkinson’s which have no effect on the disease’s progression, CDNF is a multimodal, natural protein that could have the potential to slow or even reverse damage and loss of dopaminergic neurons. It could “revolutionise Parkinson’s disease treatment”, said Henri Huttunen, chief scientific officer at Herantis Pharma.

Explaining the background for the trial, Huttunen said that in a study on rhesus monkeys, animals who had lost 80% of dopaminergic neurons were given three monthly doses of CDNF. As a result, the number of dopaminergic neurons and density of dopamine fibres was found to have doubled, while significant improvement in fine and gross motor function was also seen, as well as, for the first time in the world, improvements in some non-motor symptoms.

Magnus Sjögren, chief medical officer of Herantis Pharma, presented the safety data from the TreatER study, which was conducted in Sweden and Finland. The 17 patients who took part in the study had all had Parkinson’s disease for an average of around 10 years, with ‘off’ symptoms lasting for about five hours on average each day.

As CDNF does not penetrate the blood-brain barrier – which prevents foreign substances in the blood reaching the brain – the drug was delivered through a neurosurgically implanted device, the neuroinfuse™ drug delivery system, developed by UK sponsor Renishaw Neuro Solutions Ltd.

This, explained Huttunen, meant that the CDNF could be delivered directly to “the most important target region of the brain”, the putamen.

For ethical reasons, the surgical element of the TreatER study limited those who could take part to patients with advanced, rather than early-stage, Parkinson’s.

During the 12-month treatment period, 68 mild to moderate CDNF-related adverse events were reported, with Sjögren stating that nervous system disorders (29%), and general disorders and administration site conditions (14%) were the most common. Safety improvements were made, with the result that 87 infusions were conducted without any adverse events related to the infusion procedure, and fewer adverse events were recorded in the second half of the trial.

At the end of the study, researchers concluded that the intracerebral doses of CDNF were safe and well-tolerated, with no dose-limiting, toxic effects of the drug observed.

Huttunen said: “This TreatER project provides another important milestone in CDNF development as we have now established the safety of intracranial CDNF in Parkinson’s patients.”

In a Q&A session, professor Håkan Widner of Skåne University Hospital, Sweden, which took part in the trial, commented: “We have had a couple of clear responders in this study and they have been doing really well. At the same time, we have had patients that have not responded even though they have got an active drug and we need to find out why.”

Professor Juha Rinne from one of the trial’s centres, Turku PET Centre, Finland, and Dr Alan Whone, consultant senior lecturer in Movement Disorder at the University of Bristol, UK, who worked on a study on a different protein, GDNF, pointed out the lack of common factors among patients who showed a good response, with Huttunen agreeing that they have yet to establish an obvious reason for this and that they are awaiting further data.

Rinne and Whone also voiced the need for longer studies on a larger group to be done, and for future trials to include those with earlier-stage Parkinson’s disease.

Although the TreatER study fulfilled its purpose of proving the safety of intracranial CDNF in people with Parkinson’s disease, Herantis Pharma announced last month that its CDNF programme is abandoning the surgical-implantation method.

In a statement, it said that the surgical aspect of the treatment “significantly limits the available patient population for further clinical development. It also risks approvability of the therapy as a drug-device combination, subsequent commercialisation, and potentially delays partnerability of CDNF. The aim of Herantis is to develop a treatment that can benefit patients with all stages of Parkinson’s disease and not be constrained to late-stage patients.”

Herantis Pharma CEO Craig Cook commented on the change in direction during the webinar: “We’ll be moving away from the need for surgery and focusing on intranasal administration and subcutaneous administration. The objective is to try and expand the target population to earlier-disease patients and that’s the key driver for our decision to pursue these alternative administration routes.”

In order to do this, Herantis has developed xCDNF, a patented, chemically synthesised form of CDNF that uses small but potent biologically active fragments of the parent CDNF molecule, which it says can reach the key areas of the brain in therapeutic concentrations using a simple dosing method such as subcutaneous injection. The company is working towards final xCDNF lead selection early in 2021.

Find out more about TreatER,