Current models we have created for Parkinson’s apply to virtually no one, and maybe that’s why every clinical trial aimed to slow the condition has failed

“We know so much about Parkinson’s, but so little about people with Parkinson’s” 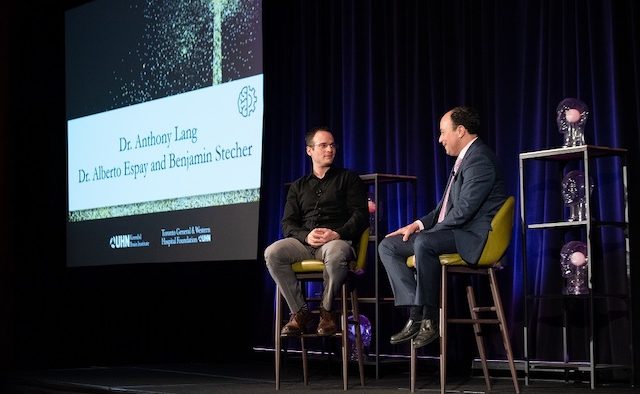 ‘Brain Fables’ aims to overhaul how we think about Parkinson’s – and suggests that it’s time to stop treating it as a single condition. We talk to the authors, Benjamin Stecher, who has young onset Parkinson’s, and Dr Alberto Espay, a professor of neurology, about the lessons learned from the research ‘failures’ that have been made so far, and why it’s crucial for scientists to find out more about individuals with Parkinson’s

Tells us about ‘Brain Fables’.

Dr Alberto Espay, professor of neurology: This book approaches neurodegenerative conditions in a way that has never been done before. We know so much about Parkinson’s, but so little about people with Parkinson’s. If we let the data speak, we would see that the current models we have created for Parkinson’s apply to virtually no one, and maybe that’s why every clinical trial aimed to slow the condition has failed. The main message is that unless we change the way we think and approach brain ageing conditions, we will continue to have failure after failure.

We view this book as an opportunity to have a frank discussion about what we know – but more importantly about what we think we know but don’t. We don’t want to remove hope, we want hope to be based on rational elements.

Benjamin Stecher, Parkinson’s advocate and consultant: ‘Brain Fables’ is like a ‘choose your own adventure’ because we’ve worked on our own elements and brought them together. My narrative brings the perspective of someone with Parkinson’s, and also the opinions of researchers that I’ve been in contact with, while Alberto brings in the science behind the arguments and his perspective as a researcher.

Each chapter is a journey of our individual research and experiences that led to our conclusions. Our stories complement one another because there are parts that build on each other and then there’s the overlapping narratives. Some may only want to read the research perspective, others the patient’s point of view and some might choose to read both.

How did the idea for ‘Brain Fables’ come about?

Benjamin: Alberto and I first began to communicate in January 2019, when I reached out to him for an interview on my website, Tomorrow Editionand found that his ideas about Parkinson’s resonated with me deeply. A lot of the conclusions he had reached were similar to my own, so we went from there.

Alberto: The original name for the book was going to be ‘Brain Fictions’, because of the idea that the narrative that has been created around Parkinson’s doesn’t hold true when you look at the data – so from a biological perspective it’s fictional.

Who is ‘Brain Fables’ aimed at?

Alberto: This book is aimed at anyone who is interested in brain ageing and what is being done to combat the symptoms of it as we delve into Parkinson’s and Alzheimer’s . We hope this will be of interest to foundations, the government and industries of health in the US – as they are the ones that invest in research into Parkinson’s.

What message do you hope readers will take away from ‘Brain Fables’?

Alberto: We are probably not going to be able to change the research process until there is enough outrage from the outside. People need to ask why they are investing in research that is not heading anywhere. This book hopes to, in many ways, shock people outside of neurology, as current research is either inconsistent, or if it is consistent it reflects on common ends of the process, not what is relevant to each individual. If we conduct a study with 100 people with Parkinson’s, we report on the averages as a way of understanding – but that means we know next to nothing about individuals with Parkinson’s.

This book is all about evidence and how this evidence conflicts with our concepts, definitions and boundaries for Parkinson’s. Unless we tackle this societally, we’re not going to get close to the precision of medicine that other fields have already accomplished.

We need to start considering the possibility that there will never be a cure for Parkinson’s but there will eventually be cures for well-defined sub types of Parkinson’s.

Benjamin: What we’re proposing is not a quick fix, it’s very much a long-term solution.

‘Brain Fables’ is set to be released in spring 2020. Find out more here.

Benjamin Stecher is a Parkinson’s advocate and consultant for academia and industry based in Toronto, Canada. Since his Parkinson’s diagnosis at the age of 29, he has spent his time travelling the world to discover more about the condition and launched his website ‘Tomorrow Edition’.

Alberto Espay is a professor of neurology based in Ohio, United States. He is an advocate of precision medicine in neurodegenerative diseases.

To find out more about Parkinson’s research, please visit the EPDA website.

Current models we have created for Parkinson’s apply to virtually no one, and maybe that’s why every clinical trial aimed to slow the condition has failed

Whatever happened to stem cells? Tune in to this free MJFF live webinar