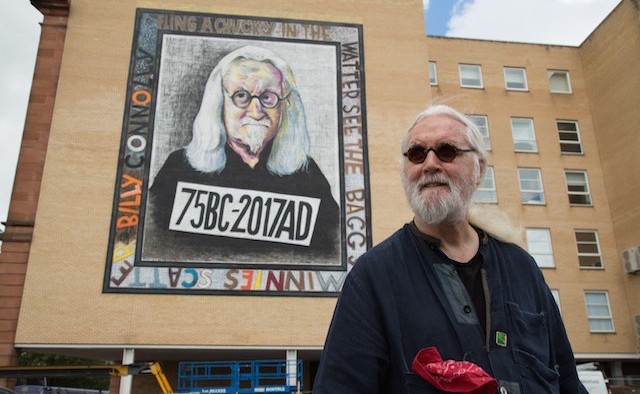 Following Sir Billy Connolly’s moving appearance in the documentary ‘Billy Connolly: Made in Scotland’ on UK television channel BBC Two, we look back at the Glaswegian comedian’s contributions to charity – and they’re just as funny and heartwarming as the man himself

Sir Billy Connolly’s recent TV appearance saw him reflect emotionally on his childhood, his half-century career in show business and the progression of his Parkinson’s disease – which he said has left him feeling as if his life is “slipping away”.

While being one of the most successful comedians in the world, 76-year-old Connolly has also worked tirelessly to help others, raising vital funds and awareness for charity. From running naked through the streets of London, UK, to visiting hospitals in Somalia, we look at some of the highlights of his philanthropic work over the years.

Musicians from around the world came together to raise money to tackle famine in Ethiopia, a tragedy that led to an estimated 400,000 deaths. Concerts were held at both  Wembley Stadium in London, England and the John F. Kennedy Stadium in Philadelphia, US. An abundance of musical talent played the venue in London including U2, Queen and David Bowie.

Leading the charge, Connolly, with his usual playful demeanour, took to the stage shouting, “Hello to everybody on earth!” before introducing pop icon Elton John.

In the late eighties, Connolly visited the war-torn nation of Mozambique in southern Africa to demonstrate how the money raised from Comic Relief was being spent. Displaying his trademark grin, he told viewers how a donated fire engine had made a significant difference to the local fire service. The firemen told Connolly that before receiving the vehicle, they would have to hitchhike to an emergency and then use buckets of water to put out the fires.

In a bid to encourage the general public to support Comic Relief, Connolly promised to streak through central London, UK, once they raised the first UK £1 million. Watching Billy run stark naked through the capital proved a powerful incentive for many viewers – the target was swiftly met and duly surpassed.

Despite facing some opposition along the way, with the police even threatening to stop the BBC filming the event, Connolly burst onto Piccadilly Circus, catching unsuspecting tourists off guard and leaving nothing to the imagination.

Connolly visited Somalia, east Africa, to highlight the terrible conditions at the Hargeisa Hospital in Somaliland. The clip made for difficult viewing, showing how with so few resources, the hospital struggled to treat those in need. With his compassionate, caring charm Connolly skilfully guided the viewer through this emotional one-hour special.

Connolly was appointed as patron to the Celtic FC Foundation, a charity initiative backed by Scottish football team Celtic FC. Connolly, a lifelong Celtic fan, was given the role to raise awareness and help motivate others.

In the wake of the Queensland floods, which affected over 200,000 Australians, Connolly announced a special charity gig, with all proceeds going to the flood victims.

Connolly said: “I wanted to do what I do. Perform on stage, offer support that way.”

Over the years Connolly’s image has become synonymous with charity work and helping others. This was best symbolised in 2015 when a statue of Connolly was erected in his hometown of Glasgow, Scotland, to encourage the general public to donate to Comic Relief. Passersby could tap their contactless cards on Connolly’s pocket and this would donate UK £1 to the cause.

UK-based readers can watch ‘Billy Connolly: Made in Scotland’ here.

Read about an upcoming research trial from Sweden and the UK