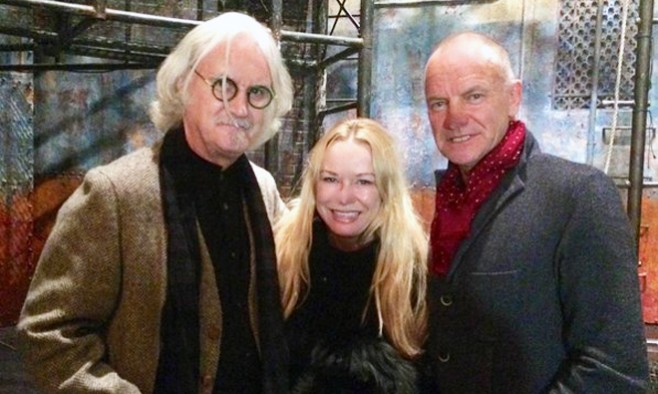 In a revealing interview, Pamela Stephenson speaks out about how her husband, Billy Connolly, is dealing with Parkinson’s. The comedian still enjoys performing and working out – and remains “as funny as ever” – having overcome the “shock” of diagnosis

Billy Connolly’s wife, Pamela Stephenson (pictured above with her husband and singer Sting), has opened up about the comedian’s Parkinson’s disease, saying he is able to look on the brighter side of life with the condition.

Connolly, 73, was diagnosed in 2013, but has continued to take to the stage around the world, including an epic 15-night London run of his High Horse tour at the start of the year.

Stephenson, who has three children with Connolly, said in an interview with Woman & Home magazine: “Billy is actually doing really well. He continues the voice exercises that help to maintain his vocal texture, but that would be necessary even if he didn’t have Parkinson’s.

“He trains hard in the gym. He continues to tour, to do movies and TV series, and is frankly as funny as he’s ever been.”

Coming to terms with his diagnosis, however, was the most difficult part for his whole family.

Pamela revealed: “To say Billy’s diagnosis of Parkinson’s was a shock is an understatement. No one in our family really knew what it meant. To be honest, we still don’t.

“There is no doubt he has been shaken psychologically by the idea of having a creeping disease for which there is no cure.”

She also admitted misreading some of the early signs of his Parkinson’s because she was viewing the symptoms from the perspective of a psychologist.

“Being a psychologist made me see some of Billy’s ­symptoms through the wrong lens. I know now, for example, that the disturbed sleep, violent thrashing around and unintelligible, aggressive shouting is a sleep ­behaviour disorder known to co-exist with Parkinson’s. His mood, too, was up and down but there were usually plausible explanations, including the stresses of being famous.”

“There is no doubt he has been shaken psychologically by it”

“But physically we had seen very little change in him. Even now, I rarely notice his hand shaking and we have been informed that the disease is on his left side, a blessing for a right-handed person. Even Billy’s specialist remarked that the average person would never know he had it.”

In a recent TV series documenting his road trip across the US, Billy declined the offer of cannabis as a treatment for his Parkinson’s symptoms after meeting an organic marijuana farmer in Oregon.

A source said: “While he was deeply intrigued by the farmer’s story of graduating from prize-winning veg farmer to the biggest pot-grower in Oregon, he’ll stick with conventional medicine.”

Comedian to leave letters behind for grandchildren after his death

Scottish comedian opens up about his Parkinson’s awards ceremony