Parkinson’s defines me as much as I have blonde hair and blue eyes. I am Parkinson’s and it is me 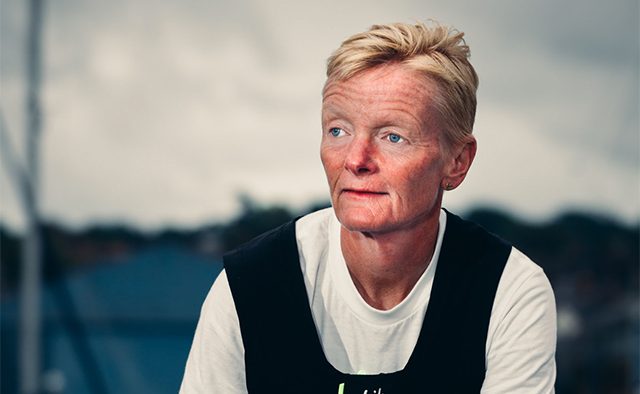 Liz Dennett, a former air hostess from Liverpool, UK, was diagnosed with Parkinson’s in 2014 aged 43. Now, alongside her crew of three, she’s preparing to kick off the new year by rowing 3,200 miles across the Atlantic Ocean to raise funds for the condition. She reflects on how her diagnosis defines her – as well as drastic diet changes, learning to swim and the luxury item she can’t go without on board

I’m 49 and I live in Liverpool, UK, with my partner and my three very mad dogs. I was diagnosed with Parkinson’s in 2014, at the age of 43. It came as a huge shock and I didn’t have a clue what Parkinson’s was. I thought it was an end of life disease.

I had been to see a neurologist a few years before about my shake, but they told me it was nothing to worry about, that it was just ‘unique’ to me. After having a bad fall, and going to a drop-in doctor, a nurse took one look at me and told me to see a neurologist straight away. My diagnosis was confirmed soon after. At first I thought it was an end of life disease but I soon realised you carry on just as before, and that you are in control of it.

What was the hardest part of being diagnosed?

In the beginning it was difficult telling everyone as I didn’t want the ‘sympathy vote’. Now though, when people say how ‘sorry’ they are – I tell them there’s no need to be sorry. It’s changed my life for the better. I didn’t want it to define me but now, five years down the line, it does.

Parkinson’s defines me as much as I have blonde hair and blue eyes. I am Parkinson’s and it is me and if I hadn’t been diagnosed, I wouldn’t have done half the things I’ve done, and I certainly wouldn’t be preparing to row the Atlantic Ocean.

How did you find out about the Ocean Row?

I saw Robin and the old crew talking about the row on UK TV show BBC Breakfast and I just thought it sounded amazing. At the end of the show, viewers were invited to get in touch about potentially taking part in the next challenge. I thought, why not? I contacted Billy Taylor, the skipper, who gave me a couple of Netflix documentaries and films to watch about extreme rowing. One was called ‘Losing Sight of Shore’. I think they were meant to put me off, but to Billy’s surprise they only left me all the more excited to take part.

How have you been preparing for the row?

If I had known what was going to be involved, in hindsight, I might have thought about it a little more. This row has taken over my life completely and I don’t just mean the training, I mean the promotional events, the corporate fundraising and the drastic change in diet. I’ve completely cut out carbohydrates and haven’t eaten a piece of chocolate in seven months. And you know what? I actually haven’t wavered once because I feel so much better because of it. I’ve also had to learn to swim, and to row, from scratch.

When I say the row has taken over my life, I mean it has literally changed me. So much so that I feel like I can take on anything, do anything. It’s my personal trainer who brings me back down to earth and reminds me to take it slow. People ask me what I’m looking forward to most, and really I’m just eager to get going, and to not think about anything else. I’m ready to row, eat, sleep and repeat.

What worries you most, if anything?

At this point, nothing. I’m more worried about coming home and having nothing to look forward to. This row is all-consuming so I’m dreading going home and going back to ‘reality’.

Who makes up this year’s crew?

Alex Mason, Scott Butler and Billy Taylor. All of them have completed a range of exciting adventures including rowing the Black Sea, the Indian Ocean and the Pacific.

When are you setting off?

We set off from Lanzarote, Canary Islands, on 4 January 2020 and will be sailing 3,200 miles – over the course of approximately 40 days – to Antigua, the Caribbean. All of the money we raise will be split between four charities, including the Parkinson’s Europe.

What luxury item can’t you go without while on board?

My electric toothbrush. Not because it’s a luxury but more because I struggle with the backward and forward motion of a normal toothbrush because of my Parkinson’s.

Which of your habits is likely to annoy your fellow crew members?

Talking. I probably won’t shut up. I think it will drive Scott mad, as he is used to doing solo adventures and being in his own head. Whereas I just like to witter on about nothing!

What will keep you going when things get tough?

My family and my dog Parker. I’m crying right now just thinking about them. It will be an amazing feeling when I know I’m four days away from shore, and they’ll all be there waiting for me.

Last year we spoke to Robin Buttery about his experiencing of rowing 3,600 miles across the Indian Ocean with Parkinson’s and reported on his progress as he spent 72 days at sea.

Parkinson’s defines me as much as I have blonde hair and blue eyes. I am Parkinson’s and it is me