There are multiple potential causes of tremor, and Parkinson’s is of course one of the best known 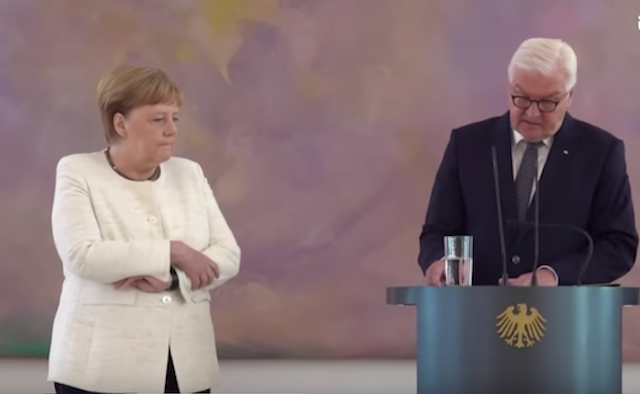 Angela Merkel has sparked health concerns after she was seen shaking at a public event in Berlin, Germany, last week.

The chancellor of Germany, who was sharing a stage with President Frank-Walter Steinmeier, showed signs of trembling for around two minutes – and had to fold her arms in an attempt to counter the tremors.

This is not the first time that Merkel’s health has come under scrutiny. In 2017, she was seen shaking during a visit to Mexico where she attended a military honours ceremony. And just two weeks ago, the 64 year old suffered a bout of shaking when meeting Ukrainian president Volodymyr Zelenskiy – something Merkel and her team said was due to dehydration.

Despite exhibiting signs of illness, Merkel still travelled to Osaka, Japan, later that day for the G20 summit – and attended all of her meetings as planned.

“There is nothing to worry about,” a spokesperson for Merkel told German newspaper Stuttgarter Zeitung. “The memory of the incident last week led to the situation today. It’s a psychological process.”

Despite assurances, commentators took to social media to share their concerns about Merkel’s health – with many drawing parallels between Merkel’s symptoms and Parkinson’s.

There is definitely something wrong with Angela Merkel if she's starting to get Parkinson's is it some kind of neurological brain disease that she's got I hope she's ok https://t.co/BxSfxJBAFe

My first reaction to seeing these clips was it looks like Parkinson's disease. I hope I'm wrong. I have a very high regard for this woman and I want her to be happy and healthy for many more years.

Just saw Angela Merkel on the news here… don't want to speculate about her health, but speaking from experience (my father), looks like Parkinson's disease to me.

Although Merkel was seen shaking – a symptom commonly associated with Parkinson’s – experts have already dismissed the notion that the politician is showing early signs of the neurological condition.

Leading Bavarian GP Jakob Berger said: “If she were my patient, I would definitely clarify the symptoms before the trip (to Japan).”

However the doctor ruled out a Parkinson’s diagnosis, saying that the tremble is “much less intense.”

Dr Juan Carlos Portilla, from the Spanish Society of Neurology, agreed with Berger’s assessment: “Parkinson’s tremor is usually more continuous and usually manifests with other neurological symptoms, such as motor clumsiness or slow walking.

“Not only must we think about neurological alterations. For example, hypoglycaemia or a drop in blood pressure can produce this type of symptoms.”

Steve Ford, chief executive at charity Parkinson’s UK, commented: “There are multiple potential causes of tremor, and Parkinson’s is of course one of the best known. But there are over 40 Parkinson’s symptoms and it’s important to remember that not everyone will experience all of these.”

There are multiple potential causes of tremor, and Parkinson’s is of course one of the best known

We explore the debate surrounding Parkinson’s and animal testing