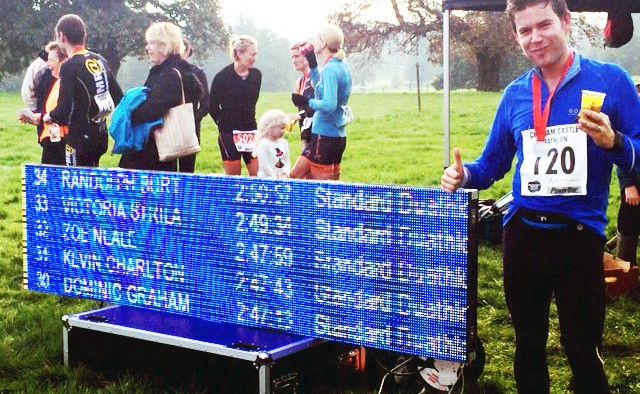 Relieved to have bounced back from injury, we hear from Dominic Graham after his duathlon to raise money for Parkinson’s 100 Challenge – Parkinson’s Europe’s fundraising event

Hooray, it’s over! I completed my Parkinson’s Challenge on Sunday (18 October) and am very pleased with the result. Following my injury last month, which stopped me from doing my chosen event in London’s Richmond Park, I signed up to another duathlon, this time in Kent. Only this time, the runs were cross country and not on the roads! So I ended up running up and down 15km of hills in the slippery grass and muddy conditions – and it was massively more difficult than I imagined! Add a 40km bike ride in the middle and I think I earned my supporters’ money.

In the end, I came 30th out of 60 competitors so I am very content with my efforts and ability.

I must now say a final and huge ‘thank you’ to all my wonderful friends and family for digging deep into their pockets to support people with Parkinson’s. I am deeply grateful and humble that they wanted to support me like they did. So far (the money keeps coming!) the run has raised about €2,100, which is simply brilliant. Thanks to everyone who has sponsored me already!

I woke up the next day barely able to walk – but every ounce of discomfort and pain was worth it. And, importantly, it’s simply nothing compared to what people with Parkinson’s and their families go through every day of their lives. I hope my contribution will go a small way towards improving things for them.

Want to join the fundraising efforts? More details on Parkinson’s 100 Challenge are here