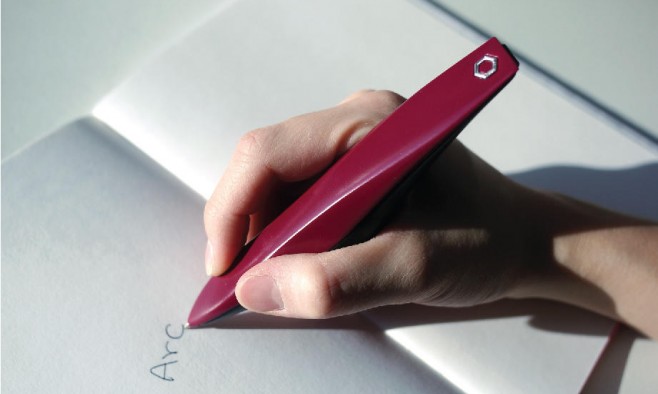 The handwriting disorder ‘micrographia’ is a common symptom of Parkinson’s where the patient’s handwriting gets smaller and smaller as they write, to the point when it’s no longer legible.

This often results in the loss of the everyday usefulness and simple pleasure of writing – from to-do lists to birthday day cards for loved ones.

But a new pen, which has been shown in tests to help people with Parkinson’s overcome their micrographia, offers fresh hope that the gift of writing may be restored to many.

The pen – known as the ‘ARC’ and claimed to be the first therapeutic vibrating pen – has an ergonomic wedge design for comfort and works by using high-frequency motors to stimulate key hand muscles.

The design team, Dopa Solutions, is made up of four students from the UK’s Imperial College and Royal College of Art. They originally set out to create a vibrating pen that showed non-patients what it was like to write with Parkinson’s.

In the early stages of testing, however, they discovered that the vibrations in fact enabled larger handwriting, helping to counter the effects of micrographia – and began developing the ARC as a writing device for people with Parkinson’s.

In a trial of 14 people with micrographia, 86% reported an improvement with the ARC pen. “I started with very big writing for some reason that I can’t explain, it just got bigger,” said one of the trial participants.

Dr James Rakshi, a neurologist who worked on the study, explained: “If you convert the micrographia into an essential tremor type of handwriting, then at least people could read their writing.”

Dopa Solutions is looking for sponsors to develop the technology further