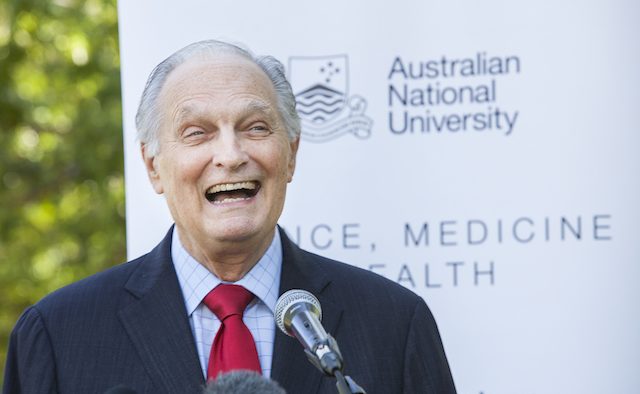 In a recent interview, the beloved US comedian and M*A*S*H sitcom star Alan Alda describes how he’s been coping during lockdown – and thinks back to the moment he received his Parkinson’s diagnosis in 2015.

It may come as no surprise that for the 84-year-old comedian, laughter has played an important and uplifting role in navigating ‘the new normal’ and bringing people closer together.

“Laughter is good. That’s one of the greatest benefits of this isolation. My wife and I are laughing more than we ever have,” he tells the American Association of Retired Persons (AARP), in an interview for their bi-monthly magazine.

“We can’t take ourselves too seriously, even now. A good friend emailed recently and said, “Alan, how are you doing? How’s everything?” I wrote back and said, “I’m still alive. If that changes, I’ll let you know,” he jokes.

Alda, who has been isolating with his wife in Long Island, US, relates how they’ve been keeping busy, and finding new ways to keep in touch with loved ones – from going on socially-distanced walks with friends to attending dinner parties over the popular video conferencing app, Zoom.

“I’ve found a lot of positive things. I’m very happy about some of the changes we’ve had to go through. For one thing, my wife, Arlene is looking for ways to be creative during this time. So, she’s gone back to painting and drawing, and she plays the piano every day,” he says.

A reflection on Parkinson’s

Alda, who announced he had Parkinson’s in 2018, thinks back to the moment he was diagnosed, and describes how one particular symptom – that of acting out one’s dreams – led him to suspect he had the condition.

“I had dreamed somebody was attacking me, and in the dream I threw a sack of potatoes at him. In reality, I threw a pillow at my wife,” he says.

On finding that his nocturnal activities were in fact an unusual, early sign of Parkinson’s, the star insisted on being seen and tested by a neurologist – who initially doubted he had the condition.

He tells the AARP: “A lot of people hear they have Parkinson’s and get depressed and panicky and don’t do anything, just hoping it’ll go away. It’s not going to, but you can hold off the worst symptoms.”

But, with his usual upbeat approach, the six-time Emmy award winner, who follows an exercise regime comprised of boxing, walking and biking, asserts “It’s not the end of the world when you get this diagnosis.”

The New York-born Alan Alda is best known for his role as Hawkeye Pierce in the war sitcom ‘M*A*S*H’, as well as for roles in the ‘The West Wing’, ‘The Aviator’, and most recently, the award-winning Netflix film, ‘Marriage Story’. His hit podcast, ‘Clear+Vivid with Alan Alda’, launched in 2018 and focuses on the art of connection and communication.