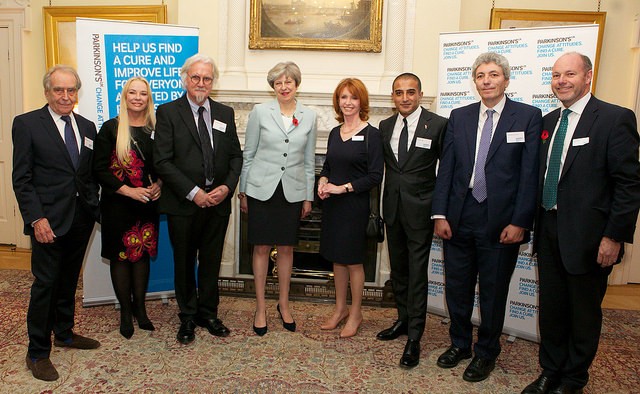 The British Prime Minister, Theresa May, hosted a reception in Downing Street, to mark the 200th anniversary of the discovery of the condition and to celebrate the work of Parkinson’s UK

The British Prime Minister Theresa May this week hosted a reception at Downing Street, London, to mark 200 years since the condition was first recognised by Dr James Parkinson in his ‘Essay on the Shaking Palsy’.

Theresa May told those assembled: “We should be inspired by the immeasurable support that this charity – and so many people in this room – provide to those affected by Parkinson’s, as well as to their loved ones and carers.

For our part, this government is investing over £1 billion a year through the National Institute for Health Research – which has doubled its spending on neurological conditions since 2010.

Already Parkinson’s UK and the UK research community have achieved a great deal together.”

PM to @ParkinsonsUK reception at Downing Street last night: "together we can bring forward the day when no one need fear Parkinson’s again." pic.twitter.com/XriYXXP503

Steve Ford, chief executive at Parkinson’s UK, said: “We won’t wait for someone else to prioritise Parkinson’s and make new treatments happen. As part of our current strategy we’re doubling our funding of Parkinson’s research – aiming to fund nearly £12million into ground-breaking research annually by 2019.”

Great that I'll have the opportunity to set out what @ParkinsonsUK is doing to secure better treatments and a cure, in years not decades https://t.co/OsuFmE4ODA

It has been half a century since the main Parkinson’s drug, levodopa, was developed, but it isn’t able to slow, stop or reverse the condition.

Campaigner Emma Lawton, 34, said: “To have all these people here, and to be able to speak in front of them and explain what it’s like to have Parkinson’s – as someone of my age – is a really great thing for me.

“I’m a big advocate of tech, it’s my job and it’s my passion. I’m looking at how tech can help support people with Parkinson’s to help really boost the medication and boost our quality of life.”

Dr Emily Henderson, who works in Population Health Sciences at the Bristol Medical School, said: “Meeting the Prime Minister Theresa May and having our work recognised this way is an enormous privilege and honour. Ultimately, our long-term aim is to find better treatments and improve the quality of life for people living with Parkinson’s.”

Read more: What’s going on in Washington DC, and what does it mean for people with Parkinson’s?

This retired engineering manager is reaching for the skies