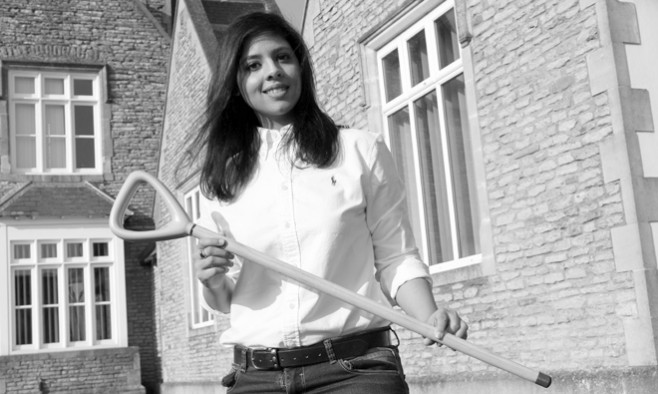 The inventor of a ‘smart’ walking stick that could change the lives of millions of Parkinson’s patients has been told she has 14 days to leave the UK after her visa renewal application was rejected by the Home Office – on the grounds of a minor technical fault – which puts her groundbreaking work in jeopardy.

Neha Chaudhry, a 24-year-old graduate of the University of the West of England, told Parkinson’s Life there was “a misunderstanding” with a date discrepancy on one of her documents in the 66-page form, which meant that it was rejected. The decision comes eight weeks after her initial application.

Born in Pakistan, the award-winning inventor has won nearly £100,000 of investment to develop her pioneering walking stick for people with Parkinson’s, which helps prevent a common symptom known as ‘freezing’ of gait – the sudden inability to walk. She has been in the UK since 2010 and began working on the device while studying for her degree in product design technology.

Neha said over the phone: “It’s very upsetting. This is not something I thought would ever happen. The thing that hit me when I first received the rejection letter on 10 May was, ‘what do I say to all the Parkinson’s patients I have promised this product to?’

“I get emails every day from patients and their families, asking me when it will be ready, people who want to buy this product for their loved ones and are hopeful that it will be made. But if I have to leave, it would delay or put my work on hold completely. I don’t know how I would answer them. They would be very disappointed and it would just be very sad.”

The problem with her visa application arose after one of her submitted documents, detailing her status as a director of the company, mistakenly didn’t include a date. 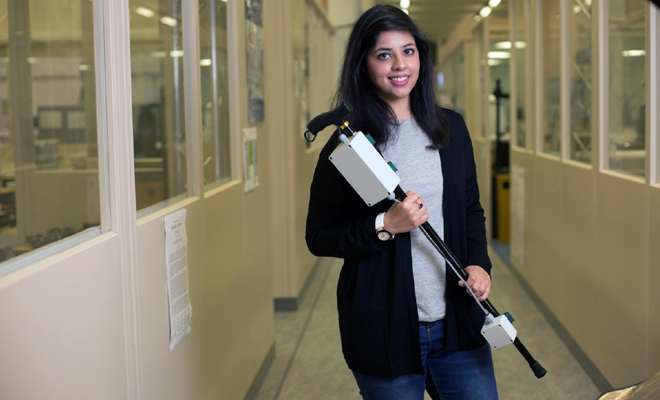 Neha with an early prototype of her ‘smart’ walking stick

Designed to look like a normal walking stick to avoid drawing unwanted attention to the user, the device sends a rhythmic pulse to the handle when it detects a pause in motion. The beat acts as a reminder, encouraging patients to walk and keep pace with it.

“I spent three to four months doing research, talking to patients, going to care homes and attending Parkinson’s UK drop-in sessions. More than the disease itself, a big problem is its impact on social lives. Some other products for people with Parkinson’s have a stigma attached to them – they look like products for disabled people,” said Neha in an earlier interview.

Around 10 million people have Parkinson’s worldwide. According to the National Parkinson Foundation, 38 per cent of patients fall each year due to freezing, which can happen without warning, anytime and anywhere, and can lead to injury.

Because of my grandfather

Inspired by her late grandfather, who experienced freezing and falls because of his Parkinson’s, the student entrepreneur founded her own start-up company, ‘Walk to Beat’, to support the development of the product.

After the walking stick showed so much promise in testing phases, with interest from the NHS and Parkinson’s UK, Neha now feels a duty to the patients to fulfill her work that will improve their quality of life.

“When I do this work I’m not doing it for my own good, but for the people who need this,” she said. “I started this work because of my grandfather and when I meet patients, they remind me of him. It is something I can relate to very easily.

“It just confuses me that on the one hand I’m getting all these entrepreneur awards, funding and prizes. But on the other, I’m told there is a technical issue with my visa, so now I’ve got to leave. This doesn’t make sense to me.”

Neha has appealed the case, which is currently under review by the Home Office.