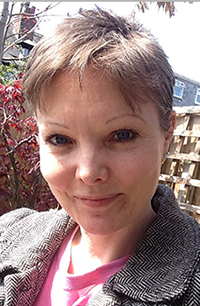 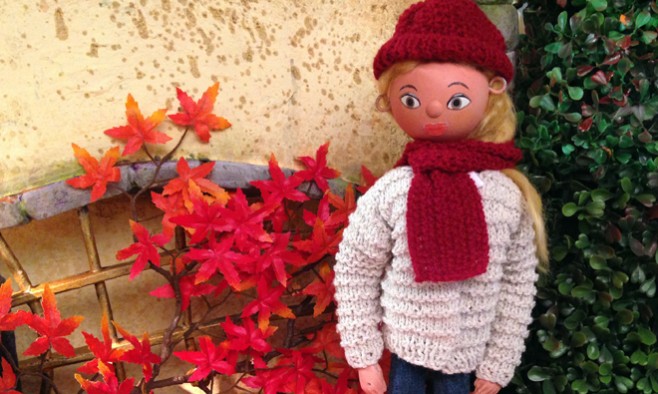 When Susan Guy’s mother was diagnosed with Parkinson’s, the only information she could find about the disease was “harrowing, frightening and confusing”. So she set out to use her creative skills as a storyteller and animator to portray the often overlooked journey of acceptance, and to show audiences – of all ages – that there is life beyond diagnosis. Here, the award-winning filmmaker from Timperley, UK, tells us about the making of her latest, most personal work that delicately deals with adapting to life with early-onset Parkinson’s, using intricate puppets and stop motion animation.

What inspired you to create a film about Parkinson’s?

When my mother was newly diagnosed with Parkinson’s seven years ago, I had no idea of the impact that it would have on either her or the people around her. My immediate reaction was to research the condition so I could become better equipped on what to expect. I found very little information depicting Parkinson’s as anything other than harrowing, frightening and confusing. Parkinson’s can be all these things and I have watched as it has changed her way of life completely, but I believe something should be available beyond this. Not just the despair of diagnosis, but the journey of acceptance and adaptation to life with Parkinson’s.

What is the aim of the filming project?

While Parkinson’s has brought some of the most difficult times to my mother’s life, the support she has received from others, who are also living with it have enriched her life greatly. So I want to show a more holistic view of Parkinson’s. What happens post-diagnosis? How do people adapt both physically and mentally? Life doesn’t stop at the point of diagnosis and that message is a very important story to be told.

In your opinion, why is there so much stigma surrounding the condition?

I think the biggest stigma comes from the fact there is currently no cure. That immediately creates fear that there is no hope.

Do you think there is a need to change the perception of Parkinson’s?

Absolutely yes! There ought to be a wealth of documentation in the media that informs audiences of the many guises of Parkinson’s – films that generate hope for people with this intrusive condition and encourage ways to adapt to it. 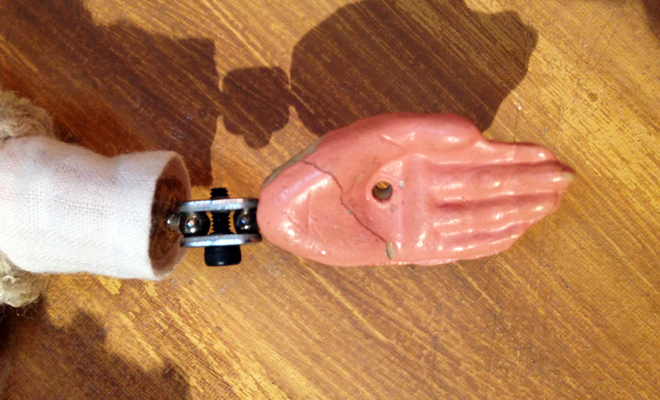 The puppet has intricate ‘joints’

How did you first get into animation?

I discovered animation while at university and realised that this medium combined what I was looking for; a creative, hands-on approach to storytelling and performance. I have 15 years experience in the film and television industry where I predominantly work as a stop motion animator. I have recently finished working on the animated TV show The Clangers, which won a BAFTA (British Academy of Film and Television Arts) accolade for ‘2015 best children’s pre-school animation’.

Tell us a bit about the storyline and characters.

The film centres around Jess and her diagnosis of early-onset Parkinson’s disease. We see how her symptoms are affecting both her and her son’s life. He is only six and fears Parkinson’s as he watches his mum’s tremors and freezing. It’s a story about coming to terms with living with the condition.

Is the story based on real life? And how have you ensured the portrayal of life with Parkinson’s remains accurate?

I have completed extensive research over the last four years and I have a wealth of knowledge from interviewing people with Parkinson’s. With this information I’ve developed a powerful script, which is the foundation for a compelling film. Although Jess is not based on a real person, she is a fictional manifestation of the people I have interviewed and their own personal experiences. 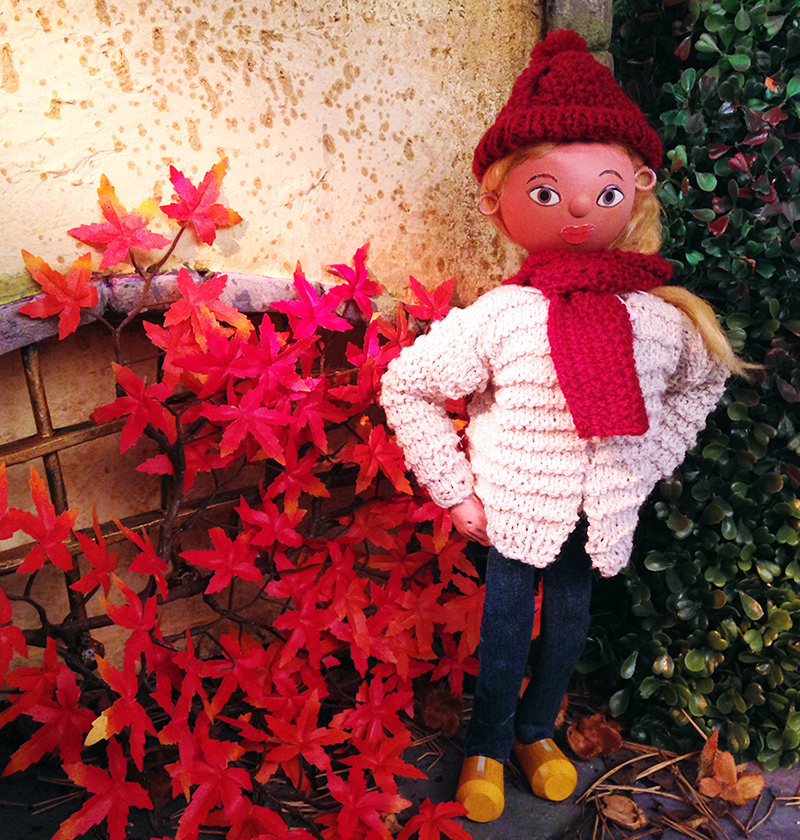 Why is animation a good platform for a story about Parkinson’s?

I feel animation will give a gentle tone to the story and themes associated, giving the topic of living with Parkinson’s the sensitivity and delicacy it deserves.

How do you intend to convey the symptoms that affect movement in the animation?

Using stop motion animation I will have full control of the puppet. While I’ll keep Jess’s body ‘alive’ by manipulating her overall body movement at a normal pace, I will portray the affected areas of the body (her hand for example) in minute movements. I feel I can portray the fine subtle movements of Parkinson’s when Jess is sitting, and the fine shuffle when she is walking. 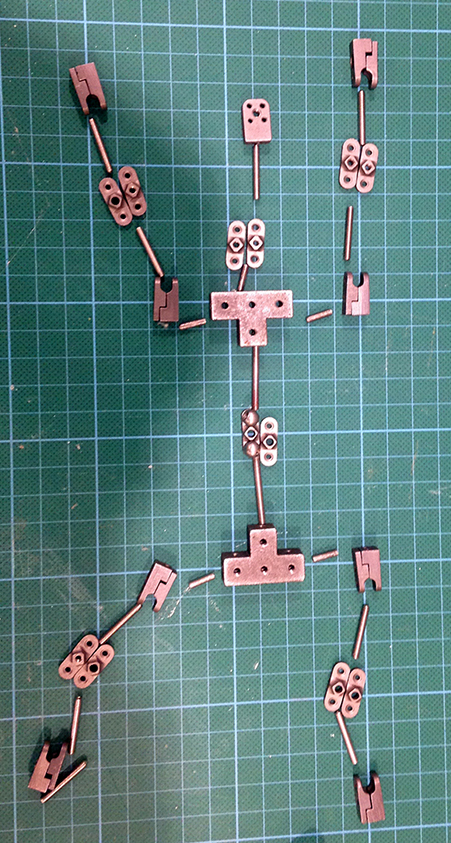 Tell us about the puppets you’ll be using.

The puppets are inspired by Pelham puppets, which are string puppets that have lovely expressive faces.

I will be adapting the puppets to make them animatable by removing the strings and locating the areas on the puppet body I want it to bend, such as an elbow or a knee. I then affix a ball and socket joint there, the aim being that the puppet body moves the same way as a human skeleton does.

There are seven sets all together with one being a doctor’s waiting room. This is for a rather ambitious scene whereby the set will need to rotate 360 degrees one centimetre at a time during the animation capture, to signify that Jess feels like her world has been turned upside down following her diagnosis. 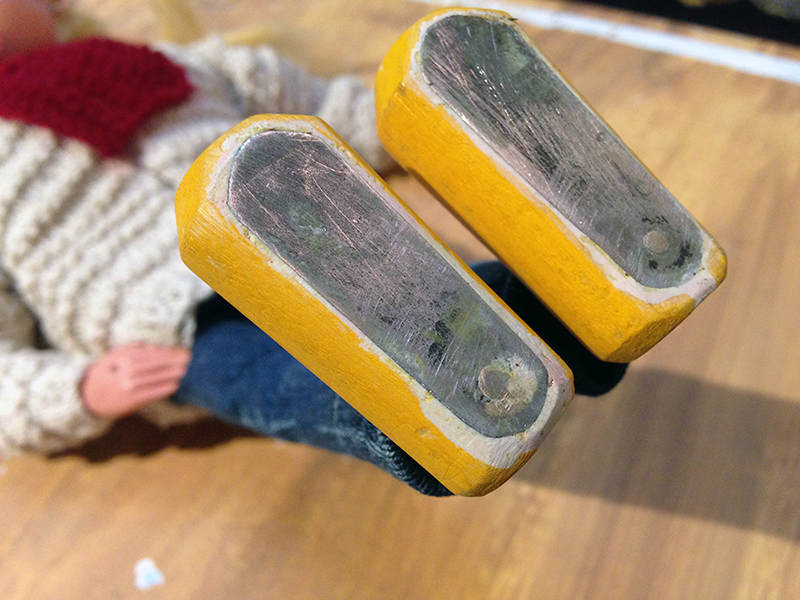 The puppet’s feet are made of magnets

How long does it take to build everything?

Depending on the complexity of what you want the puppet to do, it can take up to six weeks full-time work, as extras such as metal foot plates are required in order to magnetise the feet with a fully jointed armature. Props can take a few days and are less complex. I’ve scheduled two weeks for building the sets and then two weeks set-dressing, such as placing the prop furniture in place, applying the curtains and the like.

What are the challenges of trying to realise the film?

Time and finances are the challenges so far. While working full time helps to pay for the project as it progresses, it means that work on the project is mostly restricted to weekends.

When will the film go in to production?

Currently, myself and my small team have started making props for the kitchen scenes and soon will start building the first set to shoot on. Bearing in mind that this is a film I am making outside of my working ours, it is proving a slow process. However, the main thing is that the film is being made well and without haste. The film will be in production by January 2017 and finished sometime in that year.

How have you managed to get funding for the project?

I have applied to funding bodies previously but due to restrictions such as age category or preferred type of film genre at that time, I have only been able to self-fund the film so far. The funds are needed for materials that will be used to build the sets, create the puppets and for post-production requirements such as music, sound effects and after-effects.

Have you shared your project with Parkinson’s community?

Yes, I’ve spent a lot of time speaking with the community via online forums. Overwhelmingly, the reaction has been extremely positive, with many people seeing the potential of this project. I am keen to ensure the film doesn’t simplify or falsely represent the condition, which is something some community members are concerned about. Ultimately, I want to use real experiences from real people to enlighten and educate all ages about Parkinson’s. 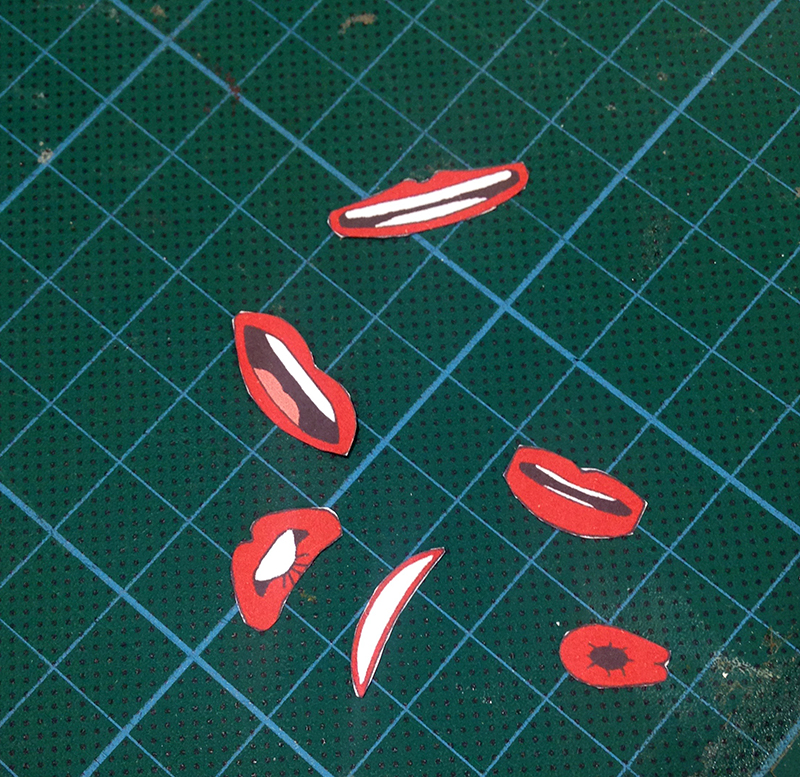 The puppet will have a range of facial expressions

Susan would love to hear from any potential supporters of the project. Email her at: susaneaguy@hotmail.com