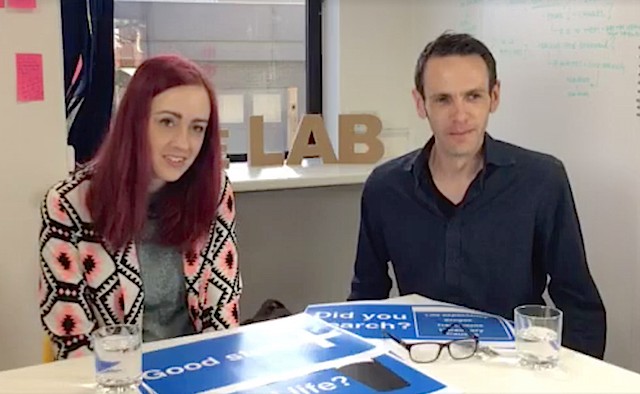 Two activists, who were both diagnosed with Parkinson’s under the age of 30, have pledged to film themselves each day for a year to raise awareness and shed light on some of the everyday challenges of living with the condition

Emma Lawton, 33, author of Parkinson’s memoir ‘Dropping the P Bomb’ and David Sangster, 35, founder of the ‘1in20Parkinsons’ online support collective, were both diagnosed with young-onset Parkinson’s disease at the age of 29. To coincide with the UK’s Parkinson’s Awareness Week, 10–16 April, they have challenged themselves to each create short videos capturing their lives with the condition – every day for a year.

Emma – who featured on the BBC Two television programme, ‘The Big Life Fix with Simon Reeve’, where an engineer created a tremor-reducing watch for her – came up with the idea and she approached David to join her in the project.

Emma says: “David was the obvious choice to do this with me. We were diagnosed at the same age, but we have such different symptoms and experiences. He was one of the first people I found my way to when I looked for support, so I know how great he is at offering guidance.”

To make sure they can fit the demands of the challenge into their busy lives each day, the pair have set some ground rules – each videos will be no longer than five minutes, take a maximum of 30 minutes to upload and will portray the condition as honestly as possible.

The world according to Emma Lawton

Emma’s first video shows her wide-awake at 02:34. As she’s tremor-free she decides to put on her signature eyeliner right there and then. By 05:37 she properly begins to get ready for the day, and she is due at a radio studio later that morning to speak about her condition.

At the studio, the radio presenter asks: “It must have taken a long time to get a diagnosis at that age. It must be unusual to be diagnosed with Parkinson’s when you’re not yet out of your twenties?”

Emma responds candidly: “Yes, I mean, no-one was expecting it, least of all me. But I was very lucky to have a great GP – who put me forward to a great consultant – and my Parkinson’s was was picked up very quickly. But I know that’s not the case for a lot of other people. The quick diagnosis it meant that I was able to start medication very quickly, which was something I was quite excited about.

“But that feeling of excitement all fell away when I realised that there’s not really been any new medication since I’ve been alive – which is quite shocking really.”

The world according to David Sangster

David Sangster hopes the project will offer both support to those diagnosed and provide information for the general public. In his first diary entry video he says: “It’s 7:35 in the evening on Monday 10 April, the start of Parkinson’s Awareness Week in the UK. I’ve been to visit Parkinson’s UK headquarters in London to discuss the dos and don’ts of movie-making.”

“I was in a taxi traveling through central London and I heard Jordan Webb [a student diagnosed with Parkinson’s at 17, now studying for a Master’s degree in neurorehabilitation of movement disorders and traumatic brain injury] talking about his condition on the BBC Radio 1 show, ‘Newsbeat’ – which is a really good place to let younger people know about all kinds of issues,” he continues.

David says: “Emma and I really hope that people watching our daily videos will find them balanced, motivational and real. Filming over a year we can hopefully help and distract those hopelessly searching the internet for ‘what Parkinson’s looks like’ or ‘what’s next?’”

Follow the video journeys of Emma Lawton and David Sangster by subscribing to their YouYube channels, or follow their progress on twitter using the hashtag #PD365

5 podcasts for people with Parkinson’s disease

From a beginner’s guide to the condition, to life after DBS