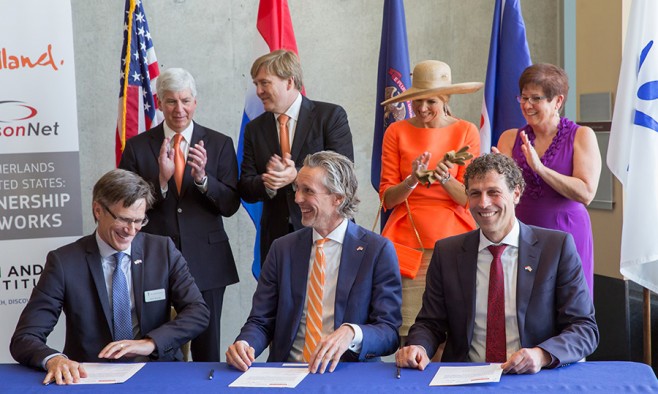 An innovative Parkinson’s healthcare programme, which has received widespread acclaim in the Netherlands, has taken its first steps to building new networks beyond Europe.

Dr Bas Bloem and Dr Marten Menneke, founders of the ParkinsonNet healthcare system, joined the Dutch royal couple on a mission last week that culminated in a new partnership with the Van Andel Institue (VAI) in West Michigan, US.

After a visit to the VAI research laboratories, Bloem and Menneke signed an agreement with Dr Patrik Brundin, associate director of research at VAI, to lay the foundations for replicating the Dutch initiative in West Michigan.

The new ‘letter of understanding’ could mean West Michigan becomes a leading state for Parkinson’s treatment in the US.

Brundin said: “This could be a fantastic opportunity for the people in West Michigan because it would mean it would be easier for them to get access to the best possible care.” Brundin and King Willem-Alexander share a personal connection to the disease – both their fathers developed Parkinson’s.

ParkinsonNet improves access to specialised care – a common challenge in Parkinson’s treatment – for patients in the Netherlands, while also lowering costs and reducing risk of injury. The initiative uses an ‘healthcare finder’ (see box below) to connect patients with nearby highly trained specialists.

Bloem told Michigan Live: “Obviously, our goal is not to stay in West Michigan alone. We’ll start small, think big, act fast. We’ll hopefully expand to the rest of Michigan, and why not the rest of the States?”