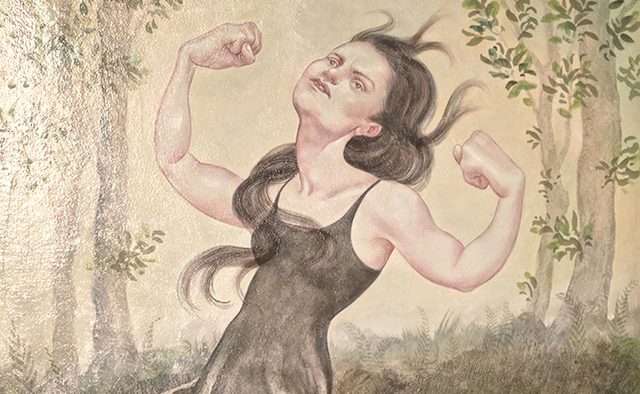 An acclaimed contemporary artist from Australia, Timothy admits that living with Parkinson’s has made his work extremely difficult at times. The artist, who has produced work for the likes of Grammy Award-winning musician and producer Quincy Jones, describes the story behind two of his paintings.

‘Irises’, oil on paper, was the first piece that Timothy painted after being diagnosed with Parkinson’s in 2012. Timothy said: “I wanted to paint how I felt before I was burdened by the limitations of my condition. So, I stood in front of the blank paper and just ‘felt it’. I closed my eyes and imagined how painting used to be, how it used to feel to hold a brush and to be in control.”

The oil on canvas piece titled ‘Good Day, Bad Day’ depicts the contrast in Timothy’s work between ‘on’ and ‘off’ days with Parkinson’s. The piece represents the reality of how a bad day with Parkinson’s can see Timothy feeling confused over things that would usually be second nature to him, such as holding a paint brush.

He said: “I think it was a shock for people to see that the same mind, the same hand and the same heart could create such vastly different images. It educated people on how much Parkinson’s can tear the very fabric of a person.”

Read our interview with Timothy John.

Jonny Acheson, a doctor based in Leicester, UK, was diagnosed with Parkinson’s in 2016, at the age of 41. Jonny began his artistic journey of representing his Parkinson’s through sketches on a napkin.

He decided to “draw the story of the diagnosis” by sketching his Parkinson’s symptoms, using them to produce a short film from the perspective of his nine-year-old daughter.

Jonny created the YouTube video, ‘My Dad: his Parkinson’s through my 9-year-old eyes’, which contains 26 of his drawings – taking four months to produce and edit. The video, that made the finalist list for the 2019 World Parkinson’s Congress video competition, depicts how children perceive and deal with their parent having Parkinson’s.

Jonny says: “I think children who are growing up with parents who have a chronic disease are more perceptive than adults give them credit for.”

Read our interview with Jonny Acheson.

Made up of six films, this series combines animation, portraiture and sound to depict the reality of living with Parkinson’s. Artist Ian Bruce created the project alongside Geraldine Peacock, who has Parkinson’s, to raise awareness of the condition.

Each film uses time lapse animation and narration to depict the honest thoughts of six people with Parkinson’s. The participants are from all walks of life, which Ian says shows that Parkinson’s “does not discriminate”.

“What I hope people will see is how in the face of unimaginable adversity, humans can find a way to turn things to their advantage.”

Read our interview with the creators of Parkinson’s Portrayed.

John McLean, a renowned abstract artist with Parkinson’s – who died in June 2019, had a career that saw him painting across the world – working in London, Edinburgh, New York and Boston over the decades.

Diagnosed with Parkinson’s in 2014, when he was in his seventies, John continued to paint –admitting that Parkinson’s exposed him to new artistic techniques.

John produced many pieces of art throughout his life – and was among the contemporary artists commissioned to create art in a cube to raise money for The Cure Parkinson’s Trust, in an exhibition which raised more than £250,000.

Talking to Parkinson’s Life in 2017 about how the condition affected his art, John said: “I’ve noticed more hand-brush strokes coming in, as it seems my fine motor skills are not so badly affected by my Parkinson’s. I never thought I’d find myself saying something as positive as this, but it looks as though having Parkinson’s has exposed me to some techniques that I might have otherwise missed.”

Read more about the life and work of John McLean.

5. Depicting ‘off’ periods: Framing OFF Through Art

Anita Kunz, one of the artists to take part in the initiative, whose work has been featured in Rolling Stone, GQ and Time magazine – created her art based on Jennifer Parkinson, who was diagnosed with the condition aged 32. Jennifer founded Neuroboxing, a non-profit organisation supporting people with Parkinson’s, after realising that boxing helped relieve her fatigue.

Anita’s painting represents the visible and invisible realities of Parkinson’s, and symbolises the juxtaposition between the confinement of Jennifer’s limbs with her fight to live well.

Anita said: “I hope it empowers people with Parkinson’s to be more open and honest with their loved ones and healthcare teams about all of their symptoms. I came into this initiative not knowing the complexities of Parkinson’s or ‘off’ periods and now that I am aware, I realise that open communication is so important.”

Read our interview with Anita Kunz.

Political cartoonist Peter Dunlap-Shohl, who was diagnosed with Parkinson’s in 2002, began documenting his life with Parkinson’s while working as a newspaper cartoonist. While creating the graphic novel, ‘My Degeneration’, based around his blog ‘Off and On, The Alaska Parkinson’s Rag’, Peter realised that there were elements of the condition that even he didn’t understand.

He said: “I was shocked to recognise how confused I was in the period immediately following my diagnosis… The relative clarity of hindsight has been an unexpected comfort.”

Peter uses illustrations to cover topics surrounding his Parkinson’s and dealing with doctors, labelling himself an accidental Parkinson’s advocate.

Read our interview with Peter Dunlap-Shohl.

For more information on Parkinson’s and creative therapies please visit the EPDA website.

Clint Bauld walked for 24 hours in aid of Parkinson’s

25 years of Parkinson’s campaigning in Slovenia