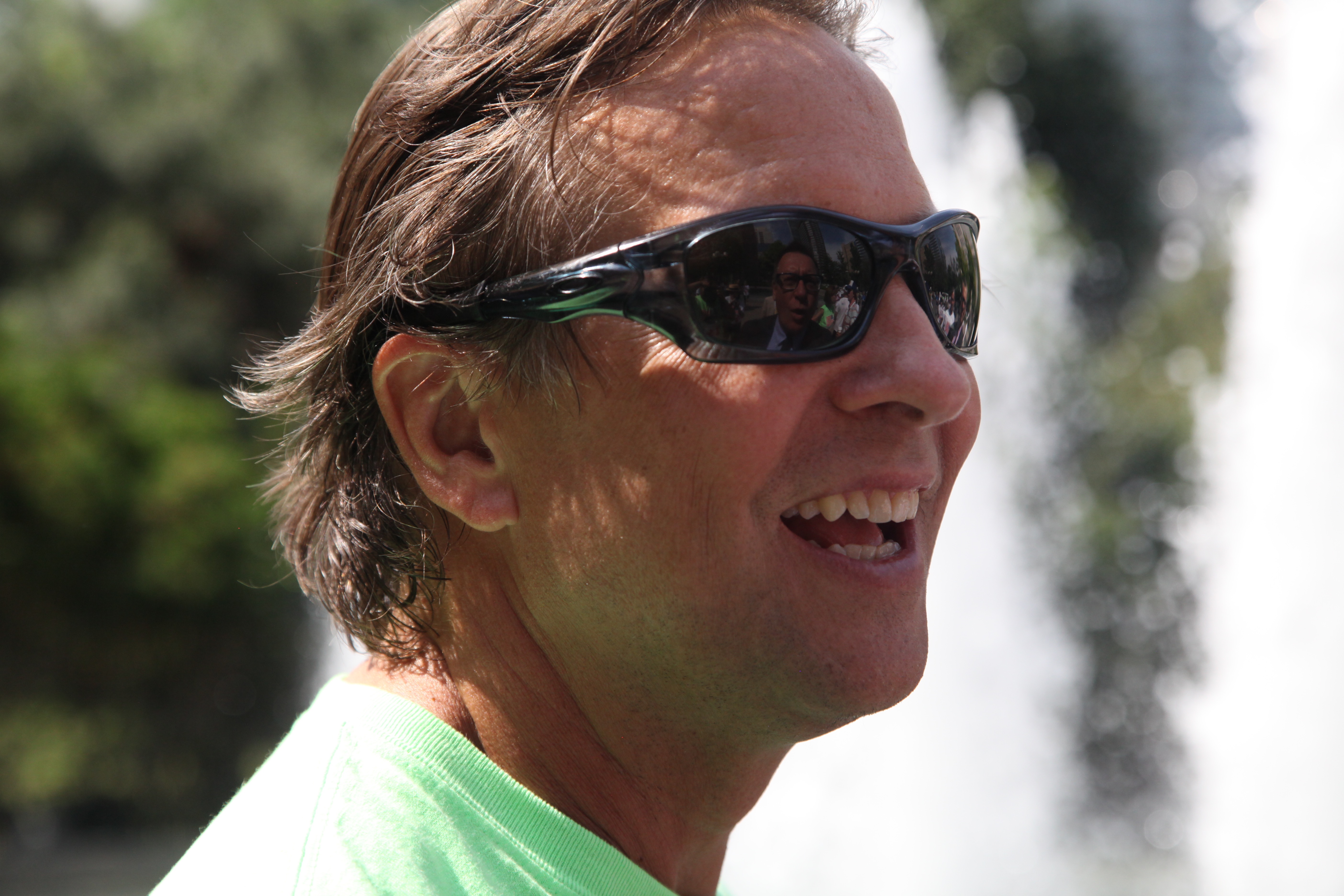 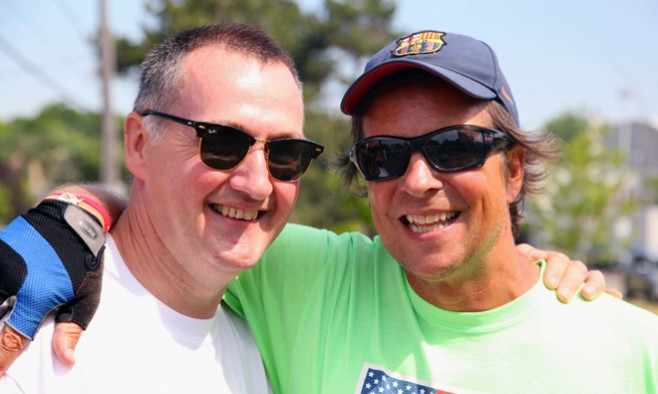 When three friends embarked on an epic 500-mile journey on foot from New York City to Toronto, they weren’t expecting the hiker who inspired the walk to travel all the way from Scotland to show his support and join them for the final leg

Five hundred miles is a long distance for anyone to walk – and it’s even more of a challenge if you’re battling Parkinson’s symptoms all the way. Yet that’s exactly what three friends – Harry McMurtry, Sue Thompson and Ross Sugar – did when they set out on a remarkable journey from New York City, US, to Harry’s hometown Toronto, Canada.

“It took all the strength I could summon to finish the walk each day, but I wouldn’t quit,” said Harry, a former lawyer who was diagnosed with early-onset Parkinson’s in 2009. “Too many people were counting on us.” 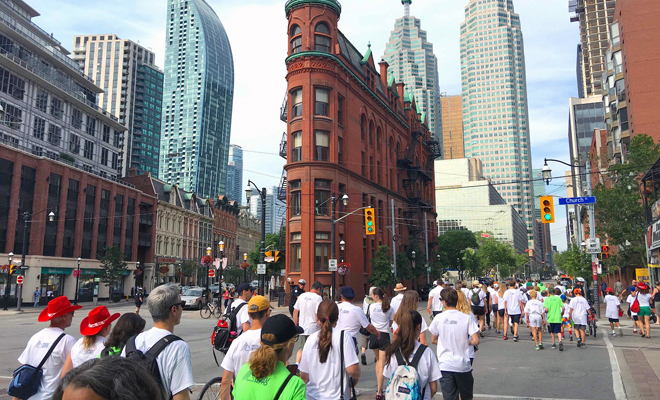 “I would be lying if I didn’t say that this took every ounce of energy and strength I had to do this,” said Harry, who was taken to hospital when he fell during the challenging walk. “By the end, my body was ready to shut down. But I wanted to help people with Parkinson’s, so I never gave up.”

“By the end, my body was ready to shut down. But I wanted to help people with Parkinson’s, so I never gave up”

If crossing the finishing line was ever in the balance, Harry’s spirits must surely have been lifted by the many friends, relatives and celebrities who turned out to support him along the way – including a surprise trans-Atlantic visit from the man said to have inspired it all.

In 2014, John MacPhee walked the same distance on his ‘Long Straight Walk’ across England and Scotland (starting at Land’s End in Cornwall and ending at John O’Groats in the Scottish Highlands). While Harry was researching his own walk, he reached out to John for advice via the Internet – and the two became friends.

So when Harry’s support team contacted John to see if he’d come all the way from Scotland to join the last leg of the walk with Harry at the end of June, in a surprise ‘guest’ appearance, he didn’t hesitate. 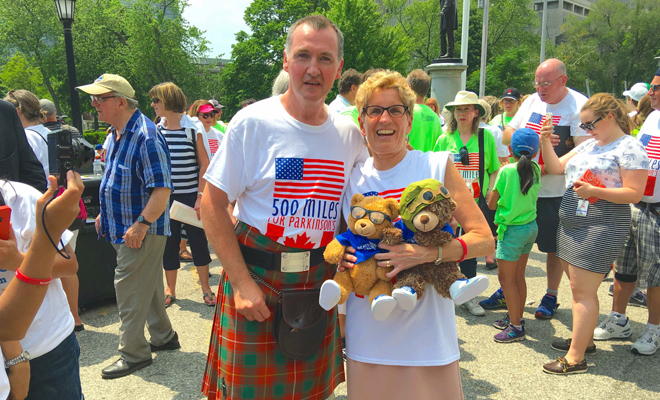 John, from Inverness, told Parkinson’s Life: “As the end of Harry’s walk drew closer the organisers urged me to complete the walk with him – Harry’s support team was keen to keep my visit a surprise for him.”

Describing the scene as the pair met for the first time, John continued: “Harry was ready to start the penultimate walk of his epic 500-mile journey. When he saw me, a huge smile spread across his tanned face. I wasn’t quite ready for the enormous hug but I knew this was a very big surprise and judging by the tears that ran down both of our faces, it was an emotional moment.”

The three walkers and their supporters – including John – celebrated the success of the challenge at a huge fundraising gala in Toronto, which saw the auction of ice hockey shirts belonging to the famous Wayne Gretzky, raising a further US$10,000. The total sum exceeded $750,000. 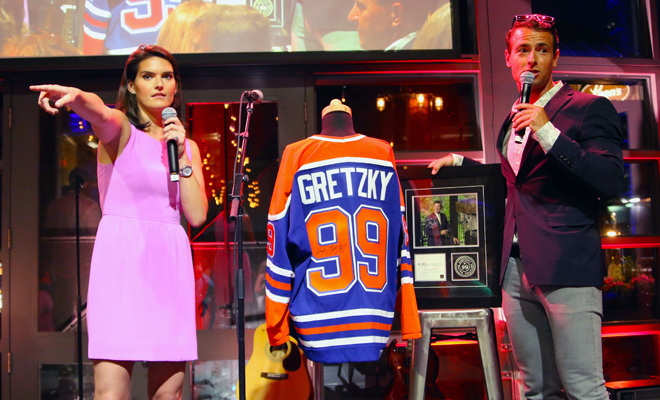 Ice hockey player Wayne Gretzky’s jersey was auctioned off for $10,000

John paid tribute to the efforts of Harry and his companions: “The three walkers who made it every step of the way are giants. Harry McMurtry, Sue Thompson and Ross Sugar are real heroes.

“They proved you are most certainly not defined by this condition, you are defined by your excellence at being human beings, the people who surround you and support you are there because you make it real, you made it happen.” 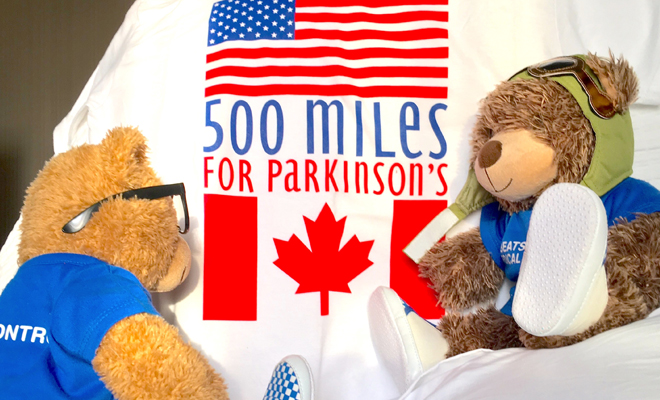 500 miles for Parkinson’s proved to be a great success

1. I walk in Salomon three seasons boots. Get a pair that suits your feet and buy two pairs if you can.

NB – Break in the spare pair on short walks.

2. Only ever take your boots off if you are going to change your socks or treat a blister.

3. Use Stride Out Foot Oil to avoid blisters.

4. Buy the best socks you can afford – I use Smartwool hiking socks with lining socks.

5. Don’t use talcum powder on your feet as it will eventually act as an abrasive.